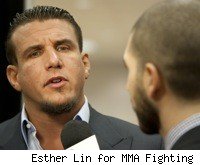 LAS VEGAS -- Watch below as Frank Mir talks about fighting Roy Nelson at UFC 130, the criticism he received after beating Mirko Cro Cop at UFC 119, why he wasn't initially keen on fighting Nelson and where a win over Nelson ranks him in the heavyweight division and more.