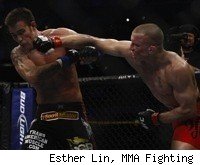 After UFC 129, we knew Georges St-Pierre's record streak of winning consecutive rounds was over, but we didn't know exactly when it was over. That was due to a quirk in Ontario politics, which required permission from the government agency that oversees the province's athletics commission before releasing the official judges' scorecards.

So finally, officially, we can report that St-Pierre's record streak of consecutive rounds won is over at 33.

St-Pierre's streak began on August 25, 2007 at UFC 74. In that match, his first since losing the championship to Matt Serra in a historic upset four months prior, St-Pierre lost the first round, according to two of the three cageside judges. But he won the second and third rounds to capture the fight by decision, and never looked back.

The streak took him through nine fights, only one of which did not have a title or interim title at stake. During that time, three of his opponents -- Serra, BJ Penn and Matt Hughes -- were former UFC champions, while Shields was the only former Strikeforce champ in the field.

St-Pierre finished three opponents and went to a decision six times, improving to 22-2 in the process.

At UFC 129, St-Pierre seemingly cruised through the first three rounds, taking all of them on all three judges' scorecards before a hyphema in his left eye compromised his vision, leaving him open to Shields' right hand.

Judges Nelson Hamilton and Richard Bertrand scored the final two rounds for Shields, snapping his streak, while Douglas Crosby marked both of them for St-Pierre.

Though one run ended, St-Pierre now has the second-longest streak of title defenses after dispatching his sixth straight No. 1 contender. The only UFC champ to have a longer run is middleweight kingpin Anderson Silva, who has an active stretch of eight straight, which he'll hope to add to when he faces Yushin Okami at UFC 134 in August.

Over time, it will be interesting to see if St-Pierre's number gets surpassed or even threatened, or if perhaps it becomes a number of lore in MMA, much the same way Joe DiMaggio's 56-game hit streak in baseball is revered now, 70 years after it happened.