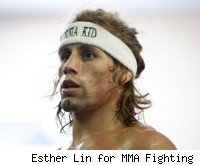 The five weeks from May 28 to July 2 are among the busiest calendar stretches that MMA has seen in years. During that time, nine major events will take place. There will be at least one championship on the line, a series of heavyweight fights will reshape the division's hierarchy, new No. 1 contenders will emerge, and we'll see the return of Gina Carano. Of course, there are always unexpected surprises that will pop up as well.

Given the enormity of that upcoming stretch, it's bound to produce much speculation, so Mike Chiappetta and I put on our thinking caps and tried to predict the outcome to four of its most pressing questions.

Which fight are you most looking forward to during this stretch?

AH: There's a ton of good ones to choose from, but I have to go with Alistair Overeem vs. Fabricio Werdum on June 18. It's amazing to think that by the time these two heavyweights meet in Dallas, it will be a week short of a year since Werdum submitted Fedor Emelianenko and 13 months since Overeem dominated Brett Rogers. Since then, we've been anxiously waiting for them to return to action, and I think Strikeforce did the right thing by matching them up in the first round of their heavyweight Grand Prix. Of course, Werdum beat Overeem in 2006, but I think it's safe to say that both fighters have improved greatly (Overeem in particular) since that fight in PRIDE. This will also mark the first time Overeem fights a legit top-five heavyweight in years (perhaps ever?) so a lot of questions will hopefully be answered in a month.

MC: There are lots of great fights coming up during this stretch, including championship fights and others with title implications, but from a sheer entertainment perspective, I'm going with the Brian Stann vs. Jorge Santiago fight at UFC 130. Both men fight with aggressive styles, look for the finish, and with the added importance of this bout considering their respective places in the middleweight division, you can expect both to be at their best. Stann seems to have made the breakthrough leap into the elite, while Santiago wants to prove to UFC fans with long memories that he's more what you've seen lately than what you saw back in 2006. Throw in a dash of Stann's one-punch knockout power and a pinch of Santiago's willingness to war, and you should have an instant classic.

AH: Again, there are many suitable answers to this question, but I think Dominick Cruz has the most to gain. Cruz has been fighting in the shadow of the UFC for the last couple of years, while dominating the WEC bantamweight division. He's one of the best pound-for-pound fighters in the world, and at UFC 132, he'll be looking to avenge the only loss of his career to his rival Urijah Faber. Not only will this fight mark the first UFC 135-pound title fight, but it will also mark the first time that two bantamweight fighters headline a UFC pay-per-view. A big win for Cruz could go a long towards getting the champion the attention he deserves.

As far as the one who has the most to lose, I'm going to pick Josh Barnett. "The Baby-Faced Assassin" hasn't fought in the US since he beat Gilbert Yvel at Affliction 2 in January 2009. Since then, a mega-fight against Fedor Emelianenko was scrapped due to a positive steroid test, which forced Barnett to fight overseas. At the time the Emelianenko fight was supposed happen, Barnett was considered by many to be one of the three best heavyweights in the world. Today, many don't have him in their top-10. So when the 33-year-old Barnett faces Brett Rogers on June 18, he will not just be fighting for the right to advance in Strikeforce heavyweight GP, he might also be fighting to keep his career relevant.

MC: Shane Carwin is the man with the most to gain. Think about how his circumstances have changed in just a couple of weeks. Before Brock Lesnar dropped out of UFC 131, Carwin was a fighter trying to rebound from a loss, and returning from a major injury, against a fighter, Jon Olav Einemo, that few fans were aware of. That's the proverbial no-win situation. Suddenly, he's thrust into a situation where he's facing the heavyweight division's No. 1 contender, and a win will vault him right into a title match. At 36 years old, a break like that must seem like a gift from the gods for Carwin.

I'll be a bit more literal with the man who has the most to lose when I tell you it's Tito Ortiz. Sure, Ortiz is nowhere near title contention, or even the top 10, but at UFC 132, he's fighting for even bigger stakes: his job. The former UFC champ and promotional mainstay is fresh out of chances. Winless since Oct. 2006, it's win or go home for the "Huntington Beach Bad Boy," who still has one of the highest base salaries in the promotion, $250,000 per fight. That's a lot of scratch, and he's not likely to find a contract anywhere else in the world that will pay him in that range if he loses to Ryan Bader and is cut.

3) Which fighter is most likely to launch himself into the UFC title picture?

MC: Quinton "Rampage" Jackson. We already know that two upcoming fights -- TUF 13 Finale's Anthony Pettis vs. Clay Guida, and UFC 131's Junior dos Santos vs. Shane Carwin -- will have some sort of title implications, so none of those men eventually fighting for a belt would constitute a surprise. But Jackson is something of a wild card.

When he was standing in the octagon waiting for the judges' decision against Lyoto Machida last November, he thought he had lost the fight, which would have resulted in a two-fight losing streak. The judges thought otherwise and he was awarded the decision victory. A win over Matt Hamill at UFC 130 would give him two straight, and four of his last five.

You might be asking why that should put him in the title picture. Champion Jon Jones, who is currently out with a hand injury, is expected to be ready to fight in late September or early October. The most likely opposition for him would come from August's Rashad Evans-Phil Davis winner, but there is very little chance either man could be ready on such short notice. The UFC is not going to keep Jones on the sidelines if he's ready to go, so who would get the title shot? Rampage, that's who. He's still a top five light-heavyweight, and if he beats Matt Hamill, he'll probably punch his ticket to face Jones.

AH: I could go the easy route and pick the winner of dos Santos vs. Carwin, and Jackson is certainly a good choice too, but I'm going to go with Wanderlei Silva.

Silva is a huge fan favorite, and while injuries have forced him to only fight once in two years, a thrilling win over Chris Leben at UFC 132 would help generate a lot of momentum for him fight the winner of Anderson Silva vs. Yushin Okami. The UFC's middleweight division could use a contender like Silva, and considering his past issues with "The Spider," that would be an easy fight to promote. Of course, Silva's age and injuries might stop him from ever seriously contending for a UFC title, but that's more reason to give him that title shot sooner rather than later.

MC: Faber has been a big part of the title picture in the lower-weight divisions for years, but he lost his last two title matches in the featherweight division while in the WEC, and his bout with Cruz marks his third try to win a major belt in the last two years. If he loses again, it will be very difficult for the UFC to put Faber back into a title match anytime soon.

At 32 years old, Faber keeps himself in fantastic shape year-round, so I wouldn't expect him to fade away in the near future, but it becomes difficult to promote title matches with athletes that keep losing in them. The public continually wants to see fresh challengers who are capable of pushing the champion. While Faber will continue to have a strong fan base, a third straight loss in title matches will cause many to believe he can't get over the hump any longer. So chances are, this might be his first and last crack at UFC gold.

Faber still has some big-time performances ahead of him, but he's going to need one of them against Cruz on July 2. If he loses, he will probably need to put together a lengthy winning streak and hope that Cruz holds on to the belt that entire time so the two can have a rubber match. That selling point may help dim any criticism about an 0-3 stretch in title bouts, but as we've seen in MMA, those types of parallel runs are quite unusual.

AH: It really all depends on how he looks. If he is dominated the way Jose Aldo dominated him last April, then this could very well be Faber's last shot at a title. But considering the fact that the 135-pound division isn't as deep as some of the other UFC divisions, I could conceivably see him going on a run to warrant another title shot even after a loss.

The thing to remember is that Faber is, by far, the biggest star in the lightweight divisions, and that probably includes the 155-pound division too. He's on commercials with Kenny Powers and, along with a couple others, helped carry WEC for many years. I won't argue with those who say he earned this title shot (and even the fight against Aldo) rather quickly off loses, but such is the life of a bantamweight or featherweight, but it MMA math aside, it just makes sense having him fight in this historic bout, just like it has always made sense for him to be fighting for the title in the past.