Jamie Varner Still Focused on MMA Even as He Looks Ahead 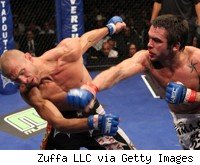 Jamie Varner was a 21-year-old junior in college fighting part-time on small shows in Arizona in 2006 when he got the call offering him a fight in the UFC. When that call came, he made the decision to leave school behind and focus on being a full-time fighter.

Five years later, Varner has been in and out of the UFC, in and out of the WEC and now back to fighting on small-time shows, having recently won a fight for the Xtreme Fighting Organization. And the state of his career right now has him going back to college even though he says he remains dedicated to his MMA career.

"I dropped out of college right before my senior year," Varner said on Monday's episode of The MMA Hour. "Like some of the great football, baseball, basketball athletes, I thought, do I stay in college or do I pursue an opportunity in professional athletics? The UFC made the call for me to fight Hermes Franca, and I did that, but after I got cut I started thinking about life after."

Varner is attending school part time at Seton Hall, continuing to work toward his degree with an eye toward eventually becoming a physician's assistant. But that's not the main reason he moved to New Jersey: He's also there to train at AMA Fight Club, home of UFC fighters Jim Miller and Dan Miller, to reinvigorate his MMA career.

Varner said that when he lost to Shane Roller in the final WEC event and learned that he wouldn't be among the WEC fighters invited to join the UFC, he was so upset that he thought about quitting the sport.

"When I got cut I felt like my girlfriend dumped me," Varner said. "I've been with Zuffa for five years. I dropped out of college. I've been chasing this dream, all in. ... I never said no to a fight. Whenever they asked me to fight, I fought."

With that, Varner said he started thinking more about what he could accomplish as a physician's assistant.

"I want to get that degree, go to South America, try to do Doctors Without Borders," Varner said. "I want to travel the world and give back."

However, it wasn't long before Varner started getting the itch to fight again. He took the fight with XFO and won easily, and he was also in talks with Dream to go to Japan and fight Shinya Aoki, although that fight fell through. Varner says he's still a fighter at heart and not ready to walk away any time soon.