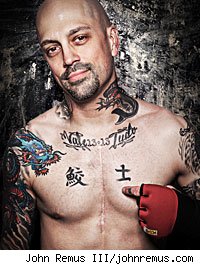 It's long been a cliche, a fighter saying he's willing to die in the cage. For Mark Miller, he never knew how close he could have been to making that literal.

At 39, Miller returns to the fight game on Saturday in Moscow in a kickboxing match at the Ultimate Glory World Series. But his comeback, fighting for the first time in more than five years, has little to do with his age. The nearly foot-long scar down the center of his chest tells the bigger story.

When Miller gets in the ring against Nikolaj Falin, he will become the first known professional fighter to return after open-heart surgery.

"There's always moments of doubt in anyone's life – but I'm also bull-headed and completely stubborn," Miller told host Ariel Helwani last week on "The MMA Hour." "I don't care if I die in the ring at this point. I have to get back to it."

When applying for a license in Florida before a fight in 2006, Miller said, his echo cardiogram came back with some red flags. Told by a cardiologist that a congenital heart defect he was born with had finally caught up to him, requiring surgery, reality set in for the "Fightshark."


"The first prognosis was my cardiac output was like 20 percent. Regular people, it's usually around 65 percent," Miller said. "It was so low that I could've been walking down the street, training, whatever – and I could just fall over and die. ... It was to the point where any stress on the heart probably could've caused a real problem at that point."

But from the first moment he knew he would have to go under the knife, Miller's focus was on finding a way to fight again.

"They had told me that even with the surgery they were going to do, because my heart was so massively enlarged, there was a chance I wouldn't be able to fight," Miller recalled. "They told me, 'It's a 50-50 chance at this point. Do you still want to do the surgery this way?' I was like, 'Yeah. It's better than no chance.' My entire focus was being able to come back to fight after the heart surgery."

After surgery in 2007, Miller was told it would likely be a year before he could fight again – if he was cleared. He was told to wait 12 weeks before doing any kind of training, so he waited 13. His proverbial heart pushed his comeback from his physical heart, and Miller said he was ahead of all the timetables set for him.

Then his father died. And a month later, his mother passed, too. And two months after that? Miller's brother died, as well. Then his marriage fell apart. And he needed knee surgery. All that should have been enough to make anyone wave a white flag. No one would have blamed him for giving up, but ...

Miller spent some time training in Las Vegas, and has talked openly about the fast-living problems he had there with plenty of partying. Telling Helwani he's on "the program" and now taking his life one day at a time, Miller has been training with renowned striking coaches Rob Kaman and Buddy McGirt for his comeback.

He said he's been cleared by doctors, and he's passed his own personal tests to let himself know he's ready to get back in there, 8 1/2-inch scar be damned. Besides, Miller said, he wouldn't fight if he believed he would be putting his three sons in jeopardy.

"I have no problems – I've been medically cleared," Miller said. "I've put myself through my own tests, and medically I've also been put through tests. It's not just, 'Hey, OK, I feel good, let's go fight.' I still have responsibilities to my three sons to not go do something stupid, no matter how bad I want it."

But after all the time away, after all the out-of-the-ring hardships, it was always the lure of returning to the ring, be it kickboxing, his first love, or MMA, that kept him pushing forward.

"I'm not going to say it's the most important thing," Miller said. "Obviously my family and my children, my family around me is very important. But as far as life goes, (fighting) was my life. That's what I had always done and I wasn't going to be able to go out on my terms. I also used fighting as a focus to get through the surgery, to rehab and come back stronger than ever. It was a goal. That was what got me through everything, and that was what got me through the surgery that night."

Miller said he would be open to a return to MMA if the right fight came along. But he believes he has more opportunities in the world of kickboxing in the near-term. And he said this is a very real comeback – he's not just out to prove he can get back in there, then hang up the gloves. "I'm full-tilt, full-bore ahead at this point," he said.

And even though many would say the deck is stacked against him thanks to the layoff, the surgery and his age, Miller said that's no concern to him at all.