Stefan Struve: If I Fight My Fight, Nothing Can Go Wrong 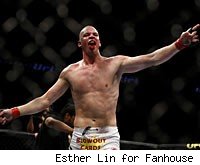 It's a little frightening to consider, but Stefan Struve may be just now getting serious about his MMA career.

Not that he was exactly taking it easy before, mind you. But only recently has the 6-foot-11 Dutch heavyweight hired his own strength and conditioning coach and started to pay close attention to his diet. As a result, the "Skyscraper" is only getting bigger and stronger. And all while he's still just 23 years old.

"It's going to be fun," Struve told MMA Fighting. "I'm looking forward to seeing how much better I am this time. When you look at my last fight, you can see how much bigger I was. After my last fight with [Sean] McCorkle I finally had trainers for everything."

Between sparring with kickboxer Daniel Ghita and working his ground game with jiu-jitsu champion Remco Pardoel, Struve undoubtedly has a strong team around him. But even more than the training, Struve said, the real difference-maker is his growing comfort level with the bright lights of the UFC.

"To be honest, it may sound weird, but all the things – the media, the fans, the attention I'm getting in the lead-up to the fight, the flight to America – it has become normal. Just like it was normal for me to fight all over Europe before the UFC signed me. I fought on big shows in Europe and that became normal for me. Now every single time I go to fight in the UFC, it becomes more normal, more routine, and that's a good feeling."

It's also a far cry from his Octagon debut against Junior dos Santos. Struve came into the fight wide-eyed and shaken by nerves, and as a result he made it less than a minute before getting rocked by the aggressive Brazilian. A hard right caught him on the side of the head, and the next thing Struve knew he was down, but without realizing how he'd gotten there.

"Then when he hit me, and I woke up. I remember thinking, sh-t, I better do something or I'm going to lose this fight," Struve said. "Then he hit me again."

It's hard to believe that it was only a little over two years ago that Struve was a clueless Octagon rookie. Now at UFC 130 he prepares for his eighth UFC bout against fellow big man Travis Browne, who, at 6'8" is yet another of the tall trees populating the heavyweight division.

But as Struve knows well, just being big doesn't win fights, and he's not altogether blown away by what he's seen of Browne so far.

"I've seen his fights with McSweeney and Kongo. I was in London when he fought Kongo. Honestly, I wasn't impressed with that fight. I don't think he was pleased with that fight either. The first round was good for him, but I think the second and third round were just kind of boring. He's got power in his hands, some good kicks, and his stand-up is pretty good. But when the fight hits the mat, I think the fight is mine. My ground game is better than his and, to be honest, I think my stand-up is better than his as well. If I fight my fight, in my opinion, nothing can go wrong."

It may be a furious effort, Struve said, but he doesn't see it lasting very long.

"I expect him to push the pace, especially in the first round and the opening moments of the second and third. But I don't plan to go there. I like to finish fights early. But I expect him to come after me and try to throw bombs, maybe even take me down. But I'm not that sure if you really want to take me down."

Fights like his come-from-behind win over Christian Morecraft may be exciting for fans, Struve said, but they're no fun for the fighter who has the spend the first round taking a beating. Still, it was good to show off an aspect of his game few had seen, even if he hoped never to have to do it again.

"People love to see those kinds of fights. They want to see fights like in 'Rocky,' where a guy gets beat up and comes back and wins the fight." Struve said. "That's what the fans love. But for me, it was a thing that my coach and I already knew, which is that I have a big fighting heart. I never quit, never give up, and that shows in fights like that. I knew that already, it's just that now the fans know too."