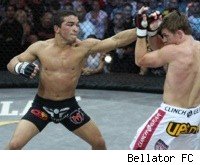 Bellator Fighting Championships closes out its fourth season on Saturday night in Lake Charles, Louisiana, with Bellator 45, featuring the finals of the promotion's Season 4 featherweight and light heavyweight tournaments, as well as a couple of undercard bouts featuring talented fighters making their Bellator debuts.

When: Saturday, the MTV2 televised card begins at 9 PM ET.

Predictions on the three televised fights below.

Patricio "Pitbull" Freire vs. Daniel Straus
In the featherweight final, Pitbull will try to avoid doing what his brother Patricky "Pitbull" Freire did in last week's lightweight final: Get overpowered by an American wrestler. Straus is on a 12-fight winning streak and could pull off a surprise, but I like Pitbull to win the featherweight tournament and earn a rematch with Bellator featherweight champion Joe Warren, who beat Pitbull by split decision last year.
Pick: Pitbull

Richard Hale vs. Christian M'Pumbu
Hale got a lot of attention for using an inverted triangle choke to win his first tournament fight, while M'Pumbu has produced a couple of impressive TKO victories in his two tournament bouts. The winner of this one becomes Bellator's first light heavyweight champion, and I'm going with Hale in what should be a close, competitive decision.
Pick: Hale

Karl Amoussou vs. Sam Alvey
After struggling through a rough 2010 in which he went 0-1-1, Amoussou bounced back with a victory at home in France last month, and I'm excited about seeing him back in North America with Bellator. Amoussou is an exciting, aggressive fighter, and although Alvey is a good striker who's 14-2 in his MMA career, I like Amoussou to win by TKO.
Pick: Amoussou