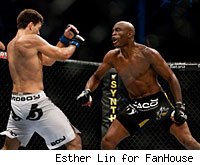 The UFC is exploring the possibility of a return event in Abu Dhabi that would take place towards the end of 2011, MMA Fighting has learned.

Sources with knowledge of the situation said there is "a good chance" the company returns to the capital city of the United Arab Emirates, likely in December, but that nothing is confirmed.

The promotion had been expected to host a show there in March before venue issues nixed the idea. Because there are no indoor arenas and the region has a hot climate, the timing of athletic events requires extra consideration. December through February is historically the coolest month in Abu Dhabi, with daytime high temperatures averaging around 80 degrees.

The UFC first visited Abu Dhabi in April 2010 with UFC 112, a card that boasted two championship fights. It was the first event held there following the purchase of a 10 percent stake in parent company Zuffa LLC by Flash Entertainment, a government-owned company.

A December return engagement would bookend a rapidly filling 2011 calendar, as events have already been scheduled late into the year. On Thursday, UFC director of Canadian operations Tom Wright told Montreal radio station The Team 990 that the company could return to the city's Bell Centre in December.

Neither of the two events have been officially booked for any venue, but an Abu Dhabi event might be the second of two expected to be held in December.

The UFC's scheduling that month is likely to be influenced by the calendar, as both Christmas Eve and New Year's Eve fall on Saturdays this year, and the promotion has never scheduled events on the eve of either holiday.