The Forging of an Unusual MMA Management Team 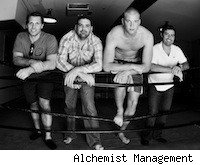 It started, as anything worth doing probably should, with a Super Bowl commercial.

Lex McMahon was on the set that day to handle the particulars of a contract for his father, Ed McMahon, who starred alongside MC Hammer in an ad where both men were overcoming financial struggles by selling one ridiculous gold item after another. Jeff Aronson was there as the CEO and founder of the company that would be buying these fictional absurdities, Cash4Gold.

Eventually, the two got to talking.

"We started out with the contract negotiations, and then the day of the shoot we stood around and talked about MMA, but just as fans," McMahon said. "Never did I think, here's this big investor for an MMA project. It was quite the opposite; he came to me."

Aronson had a plan, but he needed help first. That's where McMahon, a former Marine turned lawyer/entrepreneur, came in.

"Jeff came to me and said he wanted to start sponsoring fighters, and asked if I could help him," McMahon said.

What Aronson didn't tell him was why.

"I had starting sponsoring a few fighters through Cash4Gold, just to get a feel for what the temperature was in the industry and what the sophistication level of the managers involved was," said Aronson. "I wanted to see, really, if they had the business acumen to deal with sponsors. So I dipped my toe into it just a little bit, and then I started keeping a list of which manager would take what deal and how hard I could push them and who would bend and crumble. Some of them were really just looking for paydays for themselves rather than the fighters, including not giving fighters invoices or anything like that. It was unbelievable."

So Aronson did what any multi-millionaire, self-described "serial entrepreneur" would do when displeased with the quality of the fighter management choices – he started his own outfit, Alchemist Management.

"Lex didn't know what I was doing, but after a while I told him, 'Look, I've been tracking this for the last four or five months, and I think it's time for a real company to get involved, jump into MMA management, and start representing these fighters in a fashion that's not being done right now."

Aronson started Alchemist in July of 2010, positioning Lex McMahon as president and his old buddy Hammer as CEO. While McMahon insists Hammer is ""very much involved in strategy and planning of the company," he also seems to be not quite as involved in the day-to-day operations as they might have initially led people to believe.

The grunt work is done by McMahon and the rest of the Alchemist team, which includes a full-time PR man and even their very own "Fight Scientist," strategic advisor Reed Kuhn, who provides detailed statistical breakdowns of opponents and their tendencies to all the company's fighters – a service that, Kuhn admitted, some guys take more advantage of than others.

The goal, Aronson said, was to become a one-stop shop for fighters, handling sponsorships, public relations, and negotiating contracts all in-house. The model succeeded in attracting several young, up-and-coming fighters, such as Tim Kennedy, Stefan Struve, Brendan Schaub, and others. It also hasn't been particularly cheap or easy to pull off, and any ideas of the glamorous life of a sports agent were quickly scrubbed from McMahon's mind once he got to work.

"A lot of it is herding cats," he admitted. "Making sure this guy is where he needs to be and that guy gets what he wants."

And what his fighters want, of course, are fights. McMahon estimates he was exchanging phone calls, texts, or emails with UFC matchmaker Joe Silva "almost every day" about Schaub's desire for a fight with Antonio Rodrigo Nogueira at the UFC's summer event in Rio. It was, as McMahon put it, "a very concentrated effort" to make sure Schaub got the fight he'd asked for, and in the end it paid off.

Alchemist has also courted controversy, however, by spearheading other public campaigns on behalf of their fighters, such as the series of videos that Jorge Rivera did in conjunction with his sponsor, Ranger Up clothing, in which they mocked fellow UFC middleweight Michael Bisping in every imaginable way before the two met in the cage at UFC 127.

"That was something that [Ranger Up CEO] Nick [Palmisciano], myself, and Jorge all kind of got together and talked through what we could do for that fight," McMahon said. "Because let's be honest, before that not a lot of people were talking about that fight."

By fight time, just about everyone was talking about the videos, including a legitimately enraged Bisping. He would go on to defeat Rivera, but only after illegally kneeing him in the head, and he drew further ire by spitting at one of Rivera's cornermen when it was all over.

"I wouldn't change a single thing, and I don't think Jorge or Ranger Up would either," McMahon said. "Some of the things that happened afterward were unfortunate, and I was on the record with my views on Bisping's conduct, but the truth is we put out that content to get a certain reaction."

"It's a marketing concept. There's an author by the name of Seth Godin who does a lot of marketing stuff, and he wrote a book called "The Purple Cow." Essentially the idea is, you're driving down a country road and mile after mile you see brown cow, white cow, black cow – over and over again. It's monotonous. Then all of a sudden you see a purple cow, you're going to stop and wonder about it. It's remarkable, so you pay attention. What it boils down to is, whatever you do in branding should always be remarkable. It should always stand out in some fashion."

This seems to be the same philosophy they've applied to the management company as a whole. From having MC Hammer show up in flashy suits on fight night, to being the only MMA agency with an in-house fight statistician, it's clear that Alchemist is trying to stand out from the crowd. Alchemist is also one of the few companies to represent not just fighters, but also MMA coaches like strength and conditioning trainer Jonathan Chaimberg and Grudge Training Center head coach Trevor Wittman.

But at least according to Aronson, the goal isn't simply to make money off other people's talents.

"I was watching MMA since back before any of us could afford the pay-per-views," said Aronson, an amateur Brazilian Jiu-Jitsu practitioner who started out training at Renzo Gracie's New York City academy. "I remember everybody chipping in a couple bucks to go watch it every time, because we had to see it."

Now, he said, his management company gives him the chance to help the fighters he loves to watch with the business acumen he's accumulated over the years. As far as what he's hoping to gain out of it, he insists it isn't money. Or at least, it isn't only money. Thanks to Cash4Gold's success, he has plenty of that.