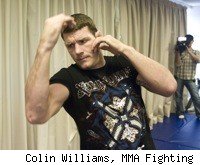 A few eyebrows were raised when Quinton "Rampage" Jackson said on Monday's episode of The MMA Hour that he wasn't particularly excited to fight Matt Hamill at UFC 130. That's just not something we're used to hearing from a main event fighter.

Then, on a Thursday conference call, Jackson clarified his remarks, admitting that a fire was lit under him after hearing Hamill say he wanted to break Jackson's will.

To get a real sense of how motivated Jackson has been leading up to the fight, MMA Fighting asked Michael Bisping, Jackson's friend and training partner, about Jackson's comments, and not surprisingly, "The Count" defended "Rampage."

"The guy's been around as long as anybody," Bisping said. "He's been around the very top level of the sport for a long time, so you know, I'm not saying he's bored but maybe some of the novelty has worn off a little bit and maybe he's grown tired of some of the ... I mean, of course there's a lot of fantastic things that come along with being involved as a mixed martial artist, but there's a few things that are a pain in the a** as well, and maybe some of those are growing on him a little bit."

Bisping later said he understood why Jackson wasn't all too excited when he heard the news that Hamill would be replacing Thiago Silva as his UFC 130 opponent.

"Hamill, while he is a fantastic fighter and a threat to most people in the light heavyweight division -- no way, shape or form knocking Matt Hamill -- I know that 'Rampage' wanted to get the title back one day, and I don't think beating Matt Hamill would be a fight that would maybe get him a title shot. So perhaps that's why he wasn't so excited."

For his part, Jackson took to Twitter Thursday evening to further explain his demeanor in recent interviews, writing:

"Since so many people r talking about my interviews, if I'm asked stupid questions u will get a certain interview, others get funny interviews."

Jackson vs. Hamill headlines UFC 130 on May 28. The main card airs live on pay-per-view.