Jason Reinhardt Drops to Bantamweight, Faces Edwin Figueroa at UFC on Versus 5 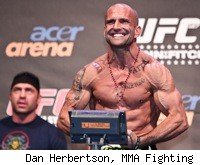 Veteran fighter Jason Reinhardt will drop from featherweight to bantamweight to take on Edwin Figueroa in August.

Sources close to Reinhardt's camp confirmed the news to MMA Fighting early Friday, and the UFC also announced the fight booking on its website. Reinhardt also said on his Facebook page that he is "so glad to be fighting such a tough UFC vet."

The bout will take place at the UFC's Aug. 14 event in Milwaukee at the Bradley Center. That card, UFC on Versus 5, will be the promotion's debut in Wisconsin.

Reinhardt (20-2, 0-2 UFC), a veteran of mostly Midwest promotions, signed with the WEC last fall to face Tiequan Zhang, a highly touted signee from China. But when Reinhardt didn't get the OK on an eye exam, he was forced to pull out of the fight. That bout moved to the UFC after the merger of the two promotions, and Zhang quickly ended Reinhardt's afternoon at UFC 127 in Sydney with a first-round guillotine.

That fight was Reinhardt's first in more than three years. After a loss to Joe Lauzon in his UFC debut at UFC 78 in November 2007, he picked up two regional wins – and then was out of action until he returned in February.

At 41, assuming Hall of Famer Randy Couture stays retired, Reinhardt is the oldest active fighter on the UFC roster. Sources close to Reinhardt told MMA Fighting recently that rather than cutting Reinhardt loose again, the promotion wanted him to make the drop to bantamweight to stay on the roster.

Figueroa (7-1, 0-1 UFC) racked up seven stoppages in Texas before signing with the UFC in March for a short-notice fight against Michael McDonald at UFC Fight Night 24 in Seattle. He lost by unanimous decision, but picked up a Fight of the Night bonus check.

UFC on Versus 5 will be one of the promotion's four scheduled cards on the Versus cable channel in 2011. Versus was the broadcast home of the WEC, and in 2010 also hosted a pair of UFC events.

Already announced for the card is a welterweight bout between former title challenger Dan Hardy and Chris Lytle; a lightweight fight between former WEC champion Ben Henderson and Jim Miller; a light heavyweight bout between Stephan Bonnar, who used to train in Milwaukee under Duke Roufus, and Karlos Vemola; and a welterweight contest between Season 8 winner of "The Ultimate Fighter" Amir Sadollah and Duane Ludwig.