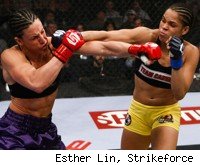 Twenty-two-year-old striking sensation Amanda Nunes will return to the cage on June 18, when she takes on veteran Julie Kedzie.

Nunes made her U.S. debut on a January Strikeforce Challengers series card, knocking out fellow striker Julia Budd in just 14 seconds. The highlight-reel win opened many eyes and lifted Nunes' name into the conversation of 145-pound contenders.

Nunes started her career with a submission loss in March 2008, but has since rattled off six straight wins, all via knockout or TKO.

Kedzie will be no easy test for her. The 30-year-old is 16-8 in her career and is riding a four-fight win streak, with her most recent victory coming against Kaitlin Young on April 9.