Rafaello Oliveira in for Injured Bart Palaszewski at UFC 130 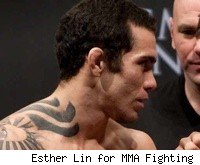 With less than 10 days before UFC 130, Bart Palaszewski has been forced off the card with an injury and will be replaced by Rafaello Oliveira against Gleison Tibau.

Sources close to Oliveira confirmed his call-up to MMA Fighting on Thursday night, and the UFC made the announcement official, saying "Tractor" has verbally agreed to the bout.

Oliveira (14-3, 1-2 UFC) has won four straight since his first stint in the UFC, which saw him drop unanimous decisions to Nik Lentz and Andre Winner, with a decision win over John Gunderson. After his loss to Winner at UFC Fight Night 21 in March 2010, he was cut loose by the organization.

Though not yet announced by the promotion, Oliveira had recently signed to fight for the Indiana-based Hoosier Fight Club, sources close to HFC told MMA Fighting. He was scheduled to face former Purdue wrestler Jake Murphy, now training at Greg Jackson's camp, in August.

This preliminary card bout in Las Vegas next week has made a complete overhaul. The fight was originally scheduled to be Cody McKenzie vs. Palaszewski. When McKenzie was forced out with an injury, Tibau stepped in. And with Palaszewski now out, Oliveira steps in, setting up a matchup of Brazilian jiu-jitsu black belts.

Tibau (22-7, 8-5 UFC) is coming off a split decision win over Kurt Pellegrino at UFC 128 in March, giving him three wins in his last four fights.

UFC 130 airs live on pay-per-view on May 28 at 9 p.m. Eastern. It will be preceded by a pair of fights on Spike TV at 8 p.m. Eastern, as well as three free Facebook prelims.