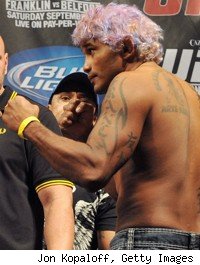 Franca, whose bail is set at $250,000, has a trial scheduled for July 12, according to Sherdog.com. A report on Examiner.com, who first reported the arrest, also states Franca pleaded not guilty on all nine counts, but MMA Fighting was only able to confirm with the Clackamas County Sheriff's Office that Franca is currently in jail and Franca's trial in July.

Though the 36-year-old Franca currently lives in Florida, he had opened a Team Hermes Franca BJJ academy in Clackamas.

The former WEC champion competed for the UFC in 2003-2004 and later in 2006-2009. Franca (22-12) was at the height of his MMA career in 2006 and 2007 when he scored notable wins over Spencer Fisher, Nate Diaz and Jamie Varner to earn himself a shot at the UFC lightweight belt. Franca ended up losing to Sean Sherk in the championship bout at UFC 73 that saw both fighters fail their drug tests following the fight.

Franca recently signed a three-fight deal with Canada's Maximum Fighting Championship promotion and was scheduled to meet Drew Fickett at MFC 30 on June 10 for the MFC lightweight belt. Shortly after news of Franca's arrest circulated around the Internet, the MFC announced the release of Franca and a new opponent for Fickett is to be announced.

"Mr. Franca's legal situation is a matter in the hands of law enforcement officials and soon to be going before the courts and because of that there will not be any further comment on those allegations, but I have taken immediate action to indicate that he is no longer going to be part of my organization," MFC president Mark Pavelich said in a statement. "We were informed about his arrest and pending trial, and as of 10:30 a.m. MT today, he has been released. These are serious allegations that he is facing and I do not want the Maximum Fighting Championship associated in any way with these matters."