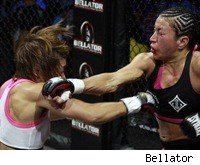 Since launching in 2009, Bellator Fighting Championships has tried to separate itself from the UFC in many ways: tournaments to crown champions, seasons, events held every week are just a few concepts that come to mind.

But Bellator CEO Bjorn Rebney said on Monday's episode of The MMA Hour that he wouldn't mind copying the UFC in one particular department: accident insurance for fighters.

"I can tell you first hand that I know that to be true because we have been looking for alternatives on that front for over a year ourselves. It's not an easy policy to obtain, it's not easy to put into motion, but I think it's great for the sport; I think it's great for the fighters. It's something that we are going to continue to look at, and I say kudos for the UFC for pulling it off."

Providing accident insurance for fighters is an expensive undertaking, and it's understandable that the UFC, which is 16 years older than Bellator, would be better suited to pull it off today.

But despite the fact that Bellator is just two years old and generating nowhere near the kind of revenue Zuffa is, Rebney recognizes that insurance is needed and is a perk he hopes to offer his fighters in the future.


"I think that the reality is, and I get to see it day in and day out, but very few of the fighters that we or Zuffa have under contract are in a position in their economic life to be able to afford health insurance to protect themselves against injuries that occur inside the cage when they are training. Of course, everyone that fights for Zuffa or Bellator is covered once they step into the cage in competition, but training for mixed martial arts is not like training for golf. You're in there battling on a day in and day out basis and injuries occur."

Bellator 45, the final event of Bellator's fourth season, will air live on MTV2 this Saturday night from Lake Charles, La.