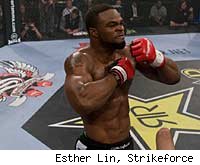 No sooner had Nick Diaz retained his Strikeforce welterweight title in April when he started discussing his future possibilities. There was a potential boxing match with Fernando Vargas thrown around, then another one against Jeff Lacy. There was a suggestion that he could face UFC champion Georges St-Pierre in an MMA superfight.

One option that Diaz seemed to immediately dismiss, however, was a rising star in his own company, within his own division, Tyron Woodley. The unbeaten Woodley, in Diaz's opinion, would be "in a little over his head" moving so quickly into the title picture.

And so the waiting game for Woodley began. At 8-0, he seems stuck in a purgatory between prospect and top-flight contender, and with no easy route to his intended destination at the top. Woodley hopes that road will begin this summer, when he is expecting to fight at a still officially unannounced July 30 show, against an opponent yet to be determined.

While he says the uncertainty of his opponent is not a source of frustration for him, he believes he should only be fighting one of two men: Diaz or Paul Daley. By their account, he's not ready for them. And by his own, he's beaten most of the contenders directly below him in the division, and facing anyone else wouldn't make much sense. What we're left with is a matchmaking stalemate.

"I think the fans want to see it," he told MMA Fighting. "You check Twitter and message boards, and the fans want to see me fight these guys. These guys had to fight someone to get a name. Diaz had to beat someone, to knock them out, like he did with Robbie Lawler in the UFC. Daley had to knock out Martin Kampmann. I'm not going to stop asking for these fights.

"They're calling out people they want to fight, people with names," he continued. "And I have to sit back and hear them say, 'Oh, he's not ready yet,' or 'I'll mess this kid up.' That's what they're saying to the camera, but deep down inside, they don't believe that."

Woodley went into his Jan. 7 match against Tarec Saffiedine with the belief that a win would get him a crack at the belt. He handled Saffiedine in a unanimous decision victory and waited to see what would happen next. First, Daley took a fight in the UK and missed weight, but ended up winning. That set him up to fight Diaz, and the fight ended in a first-round TKO for the champion.

Under the currently accepted Strikeforce rankings, Daley is the only contender ahead of Woodley that is free to fight in the summer. He has no idea if it's a fight being considered, but he doesn't think it's one Daley wants.

"For Daley, his wrestling and jiu-jitsu are his weak points," he said. "He doesn't want to get put on his back like Josh Koscheck did, like Jake Shields did, like Pat Healy did, especially by a kid who is not in the top 10 rankings, who doesn't have the same name recognition that these guys have. Daley? I don't think he wants to fight wrestlers."

He views the Diaz situation entirely differently. He says straight-up, "I don't think Diaz avoids bouts with anybody" and that he's a "fan" of watching him fight. At his best, he can even look at Diaz's situation objectively, even if it means he's the odd man out.

"I can't knock him, I can't hate on him for what he's doing," Woodley said. "Realistically, it's a lose-lose situation for him. If he fights me, he's gonna hear he's not fighting top guys because I'm not as well known. And if he loses, he lost to a prospect while I made my mark off of him. Now where do you go? So he looks around and says, 'Maybe I'll get the fight with Georges St-Pierre.' Why not fight the No. 1 guy in the world? Look at the risk vs. reward, and I can see where he's at."

When he shifts back into sportsman mode though, he says things should be more simple. In any other sport, when it gets to postseason or tournament format, or more specifically, when you're fighting for a championship, winners fight other winners. Victors move forward, and losers are weeded out. And he hasn't lost. Look around the rest of the division, and few others can say that. Daley lost his last fight. So did Evangelista "Cyborg" Santos, and Scott Smith, and KJ Noons and Saffiedine, and the list goes on.

With his six Strikeforce wins, he's a proven winner, and he emphasizes that he is not "calling out" anyone out of disrespect, but out of ambition. He says he won't be upset if he doesn't get Daley or Diaz next, and it won't change his target.

"If I don't keep moving towards a world championship, what the heck am I in MMA for?" he said. "I respect these guys as fighters and competitors, but do I want to fight you? Yes, if you've got the belt, I do. It's nothing personal."

Last week, Zuffa held its annual fighter meetings in Las Vegas, and Woodley looked around the sea of fighters, saw a few he'd fought in the past, others he wants to fight in the future. Diaz was not one of them. He never got a look at him. He did see Daley, however, and the two shook hands and exchanged quick pleasantries.

Afterward, Woodley returned back home, where he is helping his wife take care of their newborn, 3-month old Dylan. Back in the gym, Woodley is working to refine his striking and get back to basics on his considerable wrestling skills, well aware that the highest levels of MMA will require him to be more than proficient at both. Diaz and Daley are very different fighters, and will require very different preparation.

He just doesn't think they have the preparation to beat him.

"I'm not a good fight for either one," he said. "I'm faster, more explosive and a much better wrestler than Diaz. He has gas for days, can take a punch better than anybody at 170, and his jiu-jitsu is world class, but look at his three losses: Diego Sanchez, Joe Riggs, Sean Sherk. Nobody recently has fought Diaz on their own terms. They always engage him in his war and they always lose.

"As far as Daley, I just think it's a good fight for me, a cool bout," he continued. "Realistically, I don't get to decide who's next, but my next fight needs to see a performance like I had against Andre Galvao, like in my first couple bouts. I watched [Bellator's] Michael Chandler fight the other day, and I was thinking, 'That's how I used to fight.' Putting pressure on guys, heavy pressure. After the second round, he made a gesture with his hands like he was breaking a stick. He was saying, 'I broke him.' I've got to get back to that. I'm so excited to train, and I'm looking forward to getting back in the cage. I need a big fight."