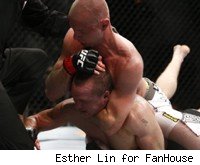 Danzig was forced to withdraw from the fight due to an injury sustained in training.

Rocha (6-1) has competed in Bellator and Strikeforce in the past. In fact, his lone defeat came against Bret Bergmark via unanimous decision at Strikeforce: Fedor vs. Werdum last June.

A Brazilian jiu-jitsu black belt under Pablo Popovitch, Rocha steps in on less than one month's notice to fight the former WEC lightweight champion Cerrone.

No word just yet on whether the fight will remain on the Spike TV prelims telecast.

UFC 131, headlined by Junior dos Santos vs. Shane Carwin, airs live on pay-per-view from Rogers Arena in Vancouver on June 11.