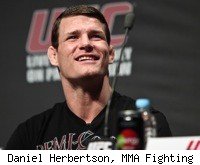 Wednesday's news that Chael Sonnen's suspension was upheld by the California State Athletic Commission will most likely ruin any chance of seeing Sonnen fight Michael Bisping in the near future.

That's a fight many MMA fans were looking forward to, including both Sonnen and Bisping.

Sonnen was unavailable for comment on Wednesday, but Bisping shared his thoughts with MMA Fighting on Sonnen's suspension and what's next for him.

Ariel Helwani: What's your reaction to Wednesday's news about Chael Sonnen?
Michael Bisping: I'm disappointed. I've been sitting on the sidelines for a while now and I think pretty much everybody can work out that I was hoping to fight Chael Sonnen, and we were waiting to hear if he was going to clear up his personal problems. Obviously today we found out that he's been indefinitely suspended.

It's a shame for the guy. I really do feel for him. We're all human beings; we all make mistakes. He's being punished, and OK, he's made some very, very bad decisions lately, but no one's perfect -- I'm certainly not perfect -- and I feel for the guy. By the sounds of it, he's stuffed in his career as a realtor and he's also screwed as an MMA fighter at the moment. He's an exciting fighter, and I think it's a shame for him; it's a shame for mixed martial arts.

What do you think you'll do next then?
Well, I'll probably go to bed in the next few minutes (laughs). Then after that, I'm sitting by the phone, waiting for a call from the UFC. I'm very, very eager to know when I'm going to fight again or whether I'm going to coach The Ultimate Fighter. I'm not sure what's happening, but I'm very, very eager. I still have been training for a while. I love to fight and I can't wait to fight again.

Did the UFC tell you about any other plans they had for you in case Sonnen's suspension was upheld?
No, they didn't. I'll be honest, I haven't actually spoken to the UFC. My manager actually spoke to the UFC about all of this, and I've just been waiting on the sidelines waiting for this to clear up. I knew there was a little red tape to go through and today we have the combination of all that. It's a shame for Chael Sonnen, it's a shame for the fans, and all in all, a bad turn of events. And for me as well, it was a big opportunity. You know, Chael Sonnen, a fight with him would have been a big deal for me and a No. 1 contender fight, so obviously, I'm disappointed as well, but yeah, I'm not sure what is going to happen now.

Are you still interested in coaching TUF without Sonnen?
Yeah, absolutely. The Ultimate Fighter did fantastic things for me as a fighter and my career. If it weren't for The Ultimate Fighter, it's possible we might not be having this conversation now. So, I'm very grateful for my time on The Ultimate Fighter as a contestant and as a coach. So if the UFC were graceful enough to give me another shot on the show, then who am I to turn it down? The UFC have been the best employees a man can ever wish for. If that's what they want me to do, then I'm their man.

It feels like every other day someone is calling you out. So now that it looks like you won't be fighting Sonnen, who do you want to fight next?
I did fancy a fight with Nate Marquardt, but to be honest, the fight that I really wanted more than anything, and I said straight after the Jorge Rivera fight, and that was before any of the rumors of The Ultimate Fighter started, I wanted to fight Chael Sonnen. I think I've paid my dues, I've proved who I am as a fighter and my skills, and I wanted to fight for the title. Chael Sonnen was ranked No. 2 and that's the guy who I wanted to fight. Not only because of that, I mean, the guy certainly does bring a lot of hype to a fight rightly or wrongly, and I thought the guy used to be hilarious in his pre-fight trash-talk. So I wanted to fight him. Other than that, I haven't really given too much thought about it. As I said, Nate Marquardt, but he dropped down to 170.

Yeah, you're right, there's a bunch of guys who have been calling me out. They're all just jumping on the bandwagon and trying to get a name for themselves. It seems popular to talk sh** about me. They can all go f**k themselves as far as I'm concerned. If they've got a problem with me, come and say it to my face, as opposed to over the Internet like a f**king spineless a**hole. But we're talking from middleweight to lightweight to heavyweight, I'll fight anyone of those guys. I try to keep it professional. You never see me calling guys out on the Internet. You've never seen me once call a guy out on the Internet or on my Web site or via Twitter. But people say I'm the a**hole.

Who do I want to fight? I don't know, anyone that is going to get me closer to a title shot.

I noticed Tim Kennedy called you out via Twitter on Tuesday. Where did that come from?
It's completely weird. He actually sent me a Tweet. It was directed to me, @bisping, 'Bisping you're an a**hole,' or something, 'You disrespected the sport and Jorge Rivera for the illegal knee.' Normally, I never, ever respond to negative Tweets because, you know, all you're doing is confirming to this person that you've actually read it and it may have gotten to you, so I never usually respond. But on this occasion, I thought, Here you've got another fellow professional of the sport that should know better, and he's directing it at me. I've never met the guy, he doesn't even fight in the UFC, and I just said, You know what, Tim Kennedy? Go f**k yourself. You've missed the train. That bandwagon left two months ago. I don't know what his problem is. Again, he's another one in a long list of people who's trying to make a name off my back.

If you were to guess, when do you think we will see you fight again?
If I was to guess, for me, I'm training hard right now. Obviously, it's been a few months since the fight, so I've gained a few extra pounds but nothing too crazy. I'm not as fat as I have been at some stages, but I want to fight as soon as possible. I'm a fighter, this is what I do. I've literally been crawling the walls since my last fight. I've been doing my best to maintain my fitness and improve my skills and stay in shape, but without a fight lined up, it's been pretty hard. It's hard to maintain motivation.

This is what I do. I truly love the sport and I'm a student of the game. Without a fight lined up it has been hard. So for me, ASAP. If the UFC were to call me up and say, We've got a fight for you in the next few weeks, I would be very happy. But I couldn't put a time as of right now.