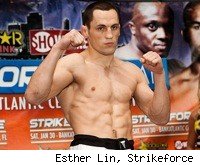 Zaromskis hasn't fared too well since winning the DREAM 170-pound title 2009. Since then, he's gone 2-2, with one no contest, which includes his Strikeforce welterweight title loss to Nick Diaz in January 2010. He most recently got back on the winning track when he defeated Kazushi Sakuraba at Dynamite!! 2010.

Other veterans scheduled to fight on the card include Joe Doerksen, Rameau Thierry Sokoudjou and Antonio Carvalho.

The event takes place at The Hershey Centre in Mississaugau, Ontario, on June 10.