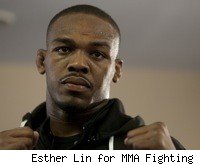 A hand injury has UFC light heavyweight champion Jon Jones out of commission at the moment, so he's spending less time on the physical side of MMA and more time on the mental side.

In an interview with MMAFighting.com, Jones said that it will be at least another month before he's cleared for full-contact training again, and that has him working more on strategy and tactics and staying away from striking and grappling. But Jones said he does expect to return to the Octagon this year, and he doesn't think there's any dearth of available opponents.

Jones also talked about his desire to coach on The Ultimate Fighter, the fights he's most looking forward to watching, and whether he deserves to be considered the world's most dangerous man. The full interview is below.

Michael David Smith: Let's start with the question everyone is asking you: How's your hand?
Jon Jones: My hand is healing up, but it's definitely not ready to withstand full-on combat training. But it is healing up.

What can you do and what can't you do?
As far as training, the main thing I can't do is grapple -- catching myself falling hurts it and causes pain. That's actually the biggest thing, catching myself while falling, and that's the thing I have to stay away from the most. As for what I can do, I can run, I can shadow box, I can study footage, I can come up with tactics, come up with strategies to prepare myself for future opponents and I think the mental aspect of combat is really important, and that's something that I can work on right now.

When do you think you'll be ready to fight next?
I'm not sure.

Who do you think your next opponent will be?
I don't know, man. That's up to Dana White, we'll have to wait and see who wins and who loses and whether people have injuries and stuff like that. So I can't really make a statement on that. I'll just have to let the fights work out.

What's your opinion of the state of the light heavyweight division these days? Most people think it's the most talented division in the UFC, but there haven't been a whole lot of title fights, with Shogun Rua and Lyoto Machida fighting twice and then Shogun needing close to a year off before fighting you, and now you needing some time off with your hand, do you think it's a problem that the title isn't being defended all that often?
No, not at all. There are lots of entertaining fights to be had even if there aren't title fights. There's great talent and almost every fighter in the Top 10 could potentially be in a title fight in this organization.

As a fan are there any fights in particular you're looking forward to?
Junior dos Santos vs. Shane Carwin -- that should be a great fight to watch, and that's the fight I'm most looking forward to. And then there's Rampage Jackson against Matt Hamill, that's a fight that could go so many different ways so I'm looking forward to that as well.

You technically have a loss on your record to Matt Hamill although even he admits that you didn't really lose that fight. Do you have any desire to fight him again and maybe get a definitive win over him? Do you think that if he beats Rampage Jackson he'd deserve to fight you?
I don't think him beating Rampage would be enough for him to earn a title fight. I have no desire to fight Matt Hamill again. That was a great performance and it's history now. I'm looking for new opponents, new threats and new challenges. I've already had the Hamill fight.

You're nominated for the most dangerous man in Spike's Guys' Choice Awards. It's you against Manny Pacquiao. Do you think of yourself as the most dangerous man in the world?
No, I don't. I think there are guys out there who would probably beat me up in a fight. If you ever think to yourself as the biggest man there's going to be someone bigger. If you let yourself think you're the best man someone else will be better. I have to focus on getting better myself. So I don't think I'm the world's most dangerous man. But when it comes to me and Pacquiao, I would certainly beat him in an MMA match because I'm so much bigger than him and it's mixed martial arts compared to someone who just uses one martial art in boxing. But the whole situation is just an honor to be a part of, and hopefully they choose me.

Where do you put yourself among all the fighters in MMA? Do you think you're the best, pound for pound?
No, not at all. I would still be behind Georges St. Pierre and Anderson Silva. I've had some great performances but I have some improving to do as a martial artist. Shogun was a great champion to beat but there were a lot of holes in his game. I still have to prove I can beat phenomenal wrestlers and phenomenal boxers. I have to do my best against every style of martial artist and show I'm a complete martial artist. So I don't consider myself the pound-for-pound best. But I do consider myself one of the top martial artists in that I think I'm one of the people who really loves martial arts, who cherishes what it means to be a martial artist in and out of the cage.

Is there anyone you could point to whom you haven't fought yet who would be the best opponent for you?
No. I just look at the whole division. I don't see one guy I haven't fought.

Immediately after you beat Shogun, Joe Rogan said on the pay-per-view broadcast, "He might be the greatest talent that we've ever seen in the UFC." Do you think of yourself along those lines?
I think that could be the case in the future. But I just have to strive for greatness, keep the passion, keep the dedication, keep working toward my goals. Right now I think that's a little premature to say, but I think it could be true one day.

Are you surprised by how fast stardom has come for you? Not just being a UFC champion but also being on The Tonight Show and that sort of thing?
Yes, that's very surprising. My goal was just to be the best fighter I could be and now I'm achieving things beyond that like being a role model and having people know who I am outside of MMA, and that's really, really cool. That's what comes from hard work and dedication and striving for greatness.