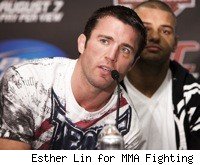 UFC middleweight Chael Sonnen on Wednesday lost his appeal against an indefinite suspension, leaving the 34-year-old contender's mixed martial arts future up in the air.

Factored into the ruling were Sonnen's money laundering conviction in January and a false testimony last December.

In January, Sonnen avoided jail time with a guilty plea to one charge of money laundering by agreeing to forfeit his real estate license and paying a $10,000 fine.

Last December, Sonnen told the commission that he had cleared the use of testosterone replacement therapy with Nevada athletic commission executive director Keith Kizer. However, Kizer said the conversation never took place. Last month on The MMA Hour, Sonnen admitted he used the "wrong words" in the testimony, stating it was information relayed to him by his manager, whom Sonnen has since relieved of his duties.

Sonnen last competed at UFC 117 in August in Oakland against champion Anderson Silva. Seemingly on his way to victory on points, he was submitted by a triangle choke three minutes and 10 seconds into the fifth and final round. Following the fight, he failed his drug test and was suspended for one year, later reduced to six months. Sonnen was then ready to make his return in March against Yoshihiro Akiyama at UFC 128, but his UFC contract was frozen in order for Sonnen to "take some time off from his fight career to focus on the resolution of some personal issues."

During Wednesday's appeal hearing, Sonnen said if his suspension isn't lifted, he could not only be missing out on an opportunity to coach The Ultimate Fighter 14 opposite Michael Bisping, but his fighting career could be over.

"If I don't get my license today I'm effectively retired," Sonnen said, according to ESPN writer Josh Gross. "That came from the boss, Dana White."