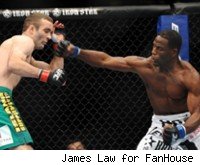 Running contrary to statements from promoter FEG, Antonio McKee claims he has been unable to obtain a visa and so has been forced out of his anticipated May 29 DREAM "Fight for Japan" bout with promotional lightweight champion Shinya Aoki.

The announcement of McKee's withdrawal first came from HDNet Fights CEO Andrew Simon with MMAJunkie.com providing the details on McKee's visa. FEG USA's Mike Kogan however has responded to the news on Twitter, admitting the fight is off but denying that the reason is McKee's visa.

Former Shooto ace Willamy Freire was also ready to fight the DREAM ace but was unable to obtain a visa and so was forced out of the bout. Former WEC champ Jamie Varner was in negotiations to fight Aoki but the bout fell through in negotiations.

DREAM "Fight for Japan", a charity event set to take place at the Saitama Super Arena, will be a scaled down version of a regular DREAM event due to power shortages following the March 11 Japanese earthquake. The full card for DREAM's first show of 2011 is after the break.