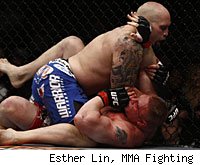 Shane Carwin can pinpoint the exact moment he lost his UFC heavyweight title fight against Brock Lesnar. His record says submission via arm triangle, second round, but forget that. That's just when the fighting officially stopped. Really, he lost it in the first, when his body began to fail him.

"First time it's ever happened to me in my life," Carwin says in his soft, low voice that forces you to lean in just to catch what he's saying. "It was terrible."

It started with a strange feeling that flooded over him right as he was at his most dominant point in the fight. One minute he was focused entirely on pounding Lesnar into an early stoppage, and then the next thing he knew he was all too aware of his surroundings, and in all the wrong ways.

"I'm always in the zone in there," Carwin explains. "I don't see or hear the crowd at all. But I remember raining bombs down on him and then all of a sudden this whoosh came over my body, and then suddenly I could see people in the crowd. Like, individual people who I could see and hear. Then I felt my body slowing down."

Before that feeling came over him he'd been too busy putting a man-sized hurting on the UFC heavyweight champ to notice anything else. A stoppage victory seemed like it couldn't be more than one or two more punches away.

Then those punches lost all their zip. His legs tightened up. His body seized. By the end of the round, it was all he could do to walk to his corner.

When he got up off the stool for round two, he knew he had nothing left. Lesnar, meanwhile, was bloodied but unbroken. He winked at Carwin from across the cage, and Carwin's trainer, Trevor Wittman, felt his heart sink into his socks.

"When you get done kicking a guy's a-- and he gets up and winks at you, that's a bad feeling," Wittman says.

For Carwin and Wittman both, it's a feeling that's lingered ever since the loss last July. Sort of like a break-up, the best way to get over a loss in the world of pro fighting is to find someone new to beat up, but neck surgery and the ensuing rehab kept him out for the last half of 2010 and the first half of 2011. It was all he could do to ramp it up in time for a gradual return to action against UFC newcomer Jon Olav Einemo at UFC 131 on June 11.

That was the plan, anyway. At least until he checked his cell phone following a conditioning workout last week and saw an increasingly frantic list of missed calls from his manager and from Wittman. The mood was urgent, but the message was simple: Lesnar was out of his No. 1 contender fight with Junior dos Santos, and, if he wanted it, Carwin was in.

"When I saw my phone had been blown up by those guys, I thought I had done something wrong," he said. "I was actually pretty concerned. But when I heard the news, I was just so excited."

And why not? Instead of fighting a 6-foot-7 submissions specialist who few fans had ever heard of (and against whom he had much more to lose than gain), Carwin now finds himself one win away from another shot at the title.

It's a good thing, too, because at 36 years old he knows he can't wait forever. The neck surgery gave him back full feeling in his right arm for the first time in a long time, but it was also the third surgery in his five-year career. The deep scar that runs up the inside of his left arm is a reminder of another, and after having his nose temporarily moved to the side of his face by Gabriel Gonzaga let's just say he appreciates the value of facial symmetry more than ever these days.

"It gets a little harder to come back from injuries and surgeries as you get older," he says. "I still want to jump back in there like a 22-year-old."

The good part about the first loss of his career is that it forced Carwin to change some aspects of his training. Instead of trying to blow himself up into a 280-pound beast with the help of creatine and power-lifting, he hired Grudge Training Center nutritionist Josh Ford and slimmed back down to the 250's. That's where he feels better, he says, and where he'll stay if he can "stay away from the chips."

The loss to Lesnar? Sure, it still stings. It stung even worse to watch Cain Velasquez beat him, not only because the new champ avoided making the same mistakes Carwin did when he had Lesnar hurt, but also because it dashed Carwin's hopes of one day taking the belt from Lesnar in a rematch.

"You live and you learn," Carwin says. "If I get somebody in that situation again, I'll probably pick my shots better. I never disagreed with [referee] Josh [Rosenthal]'s decision not to stop it. Brock came back and beat me, so how can you argue with that? But it was all I'd ever known from my previous fights. That's how my fights ended, was me on top of the guy raining punches down."

Now that he's in against dos Santos – by Carwin's estimation, the fourth straight top ten heavyweight he's faced – he might have to learn some new ways. There's nothing but tough opponents from here on out.

Not that Carwin's complaining. He doesn't have the time to wait around or his work his way back up to the top again. If it's going to happen for him, it has to happen soon.