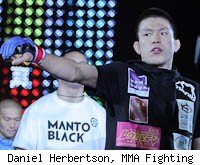 UFC veteran Rich Clementi is the latest candidate in a long line of possible opponents for DREAM lightweight champion Shinya Aoki at DREAM "Fight for Japan" on May 29 at the Saitama Super Arena in Saitama, Japan. FEG USA's Mike Kogan released the news via Twitter, but also stated that although the bout has been agreed upon, a contract has not yet been signed.

Clementi has gone 7-7 since his last win in the UFC in May 2008 and back to back losses to Gray Maynard and Gleison Tibau saw the 60-fight veteran lose his UFC contract.

Former Shooto champ Willamy Freire, former WEC champ Jamie Varner and MFC Champion Antonio McKee were all set to face the DREAM champion on May 29 but those bouts all fell through for various reasons. Some outlets have also indicated that BJ Penn student Shane Nelson was set to face Aoki but that bout has not materialized.

The full card for DREAM's first event of 2011 is after the break although as experience shows, it is obviously subject to change.
DREAM "Fight for Japan" - May 29, 2011 at Saitama Super Arena, Japan