Rampage Jackson Not Excited With Matt Hamill for UFC 130 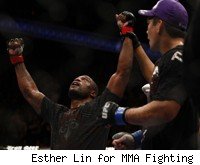 After some shuffling around of the upcoming UFC 130 fight card, Rampage Jackson has gone from taking on Thiago Silva in the co-main event to fighting Matt Hamill in the main event. He's not particularly thrilled with the change.

"Thiago Silva is the type of guy I would love to fight because he has great stand up and he comes to fight most of the time, so I was looking forward to fighting a guy like that," Jackson said on The MMA Hour. "Matt Hamill wasn't on my radar at all. I wasn't excited at all. But then again, not a whole lot gets me excited."

Jackson's comments about not being excited for the fight stand in contrast to the comments of Hamill, who said he plans to break Jackson's will. But Jackson says that the difference between their public comments is simple: Hamill needs to convince himself that he can beat Jackson, while Jackson already knows that he can beat Hamill.

"He's just got to jive himself up so he actually thinks he can stay with me. If you've seen my fights over history, I don't think my will gets broken too often for anybody to even say that," Jackson said. "Matt Hamill is a great wrestler and stuff like that, but I've got more experience than him and I've fought a lot tougher people than he's fought. He's got a while to go before he can say he can break anybody's will."

Jackson said he's received some insight from his friend and training partner Michael Bisping, who has fought Hamill previously, and that he brought in a group of great wrestlers to work with him as sparring partners, and that he'll be ready for Hamill's style as a result. He also said that despite no longer being on the famous "Dolce Diet," he's currently in great shape and lighter than he has been at the same time in previous training camps.

Ultimately, Jackson said, even though he doesn't find Hamill to be an exciting opponent, he expects to deliver in the main event.

"I just know that I plan to go out there and be very aggressive and very exciting," Jackson said. "That's all I know."