Matt Mitrione: If Ortiz Is Still Upset After Confrontation, 'Then We Can Scrap' 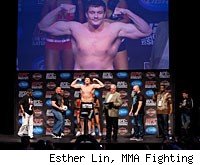 After making enough jokes at Tito Ortiz's expense, UFC heavyweight Matt Mitrione figured he should at least make an effort to meet the guy in person when he saw him at last week's UFC fighter summit.

As anyone who saw the YouTube video of their confrontation already knows, that introduction didn't go so smoothly.

"I rip on Tito freely all the time, and I have no issues or qualms with ripping on him," Mitrione told Ariel Helwani on Monday's episode of The MMA Hour. "I do it publicly, I do it privately, I do it wherever. But I'd never met him before in person, so I kind of felt like I should at least honestly go and introduce myself to him, so that way he can never be like, 'I've never met that coward and blah, blah, blah.' I wanted to go up to him and be like, 'Hey, I'm Matt. I'm the dude who throws heat on you.'

But as it turns out, Ortiz had either seen Mitrione's cracks about him on 'The Mitrione Minute' segment of The MMA Hour, or had at least heard about them from someone else, because as soon as Mitrione extended his hand in greeting Ortiz rose out of his chair and shoved him, Mitrione said.

"What happened was, he was talking to Roy Nelson when I approached him. He was talking to Roy, he was sitting down, I walked up and extended my hand, said, 'Hey, I'm Matt.' As he stood up he said, 'Yeah, I know who you are,' and he...pushed me. All one movement. I was wearing my flip-flops like I always do because I'm a summer baby. I kicked my flip-flops off, licked my fingers like I did on The Ultimate Fighter, because I guess that's a habit of mine, and I was like alright, let's scrap."

No one threw any actual blows – probably a good thing, since physical violence would have likely been frowned upon in the Red Rock Casino's conference room – but the two engaged in a heated verbal battle that UFC heavyweight Roy Nelson captured on video and subsequently posted on YouTube.

Mitrione insisted that he never intended to get in any such confrontation with Ortiz when he approached him, but wasn't about to back down after he'd been shoved, either.

"I started to square up a little bit, and then he kept saying, like anybody who doesn't really want to fight, they're like 'hit me, hit me then, hit me.' Well, that's stupid. That's why, in the video, I was like, 'Well, you're the one being aggressive. If you want to be aggressive, then let's scrap. ...I came and introduced myself. I didn't come up here to fight you.'"

After the two had their confrontation at the summit, Mitrione said he knew he needed to let UFC president Dana White know what had happened before he had the chance to get the wrong idea about the situation.

"Just to show that I am a professional, I sought out Mr. [Lorenzo] Fertitta and Dana after all that stuff. I went to go work out and Dana was there and I approached him and pulled him to the side and I was like, 'I want you to know I'm sorry. I did not intend to disrespect your meetings. I didn't intend for that to happen. I just walked up and introduced myself to him and that's when all that stuff occurred, and I'm a grown-ass man and if Tito wanted to throw hands, then I'm sure as hell going to do that.'"

He and White talked it over, Mitrione said, and then he left the UFC president with one final word on the subject.

"At the end of it I was like, 'Just to let you know, if Tito really wants to run his mouth about this...I will cut down to as close as to 205 as possible, or hopefully you'd let me do 225 as a catchweight, and I will kick his a--.' So all these boys who say I'll never fight him, I told Dana and I told Mr. Fertitta that I wanted to cut weight to whoop his a-- if he would take that fight."

Mitrione, who usually weighs in at around 260 pounds for his fights, would have quite a ways to go to get down to Ortiz's weight. But the former NFL player said he'd already discussed the potential of just such a drastic cut with noted MMA nutritionist Mike Dolce.

For now though, Mitrione has other concerns. He's slated to fight fellow heavyweight Christian Morecraft at a UFC Live event in late June, and so he doesn't have the time or energy to worry too much about Ortiz, he said.

"I'm glad that this happened six weeks ahead of my fight and it's going to die now, because I've got Chris Morecraft ahead of me, and Christian is a big-a-- heavyweight. He's a much bigger heavyweight than I am."

As for Ortiz, Mitrione said that if the former light heavyweight champ still wants to press the issue, he'd be happy to take a catchweight fight and "retire Tito's old a--." But if Ortiz is willing to let bygones be bygones, so is he.

"I think that Tito didn't necessarily want to fight me about it, but I think he felt like, as a man, he had to pop up and do something about it. And I respect that. I respect that completely. But if he's not satisfied with what went on, if he's not satisfied with his Twitter monologues or soliloquies or his wife's...then we can scrap. If not, if you're cool with it, then I'm cool with it too."