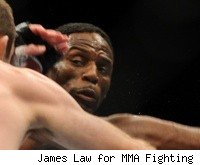 The only thing Antonio McKee is willing to say for certain is that he won't be fighting Shinya Aoki at DREAM's 'Fight for Japan' event at the end of the month, as was initially planned. As for why, that answer is a little trickier, and one he's keeping to himself for now.

"You know what? So I can fight Aoki in the near future, I'm not going to say anything about it," McKee told MMA Fighting on Tuesday. "I'll just say, I've heard it was because I just had surgery. I've heard there's something wrong with my visa. I've heard I wasn't getting paid so I wasn't taking it. But it is definitely my responsibility that the fight's not happening, and I'll just leave it at that. Because I want that fight, sooner or later."

McKee declined to explain any further, saying he was going to "protect myself and protect DREAM" by not disclosing the reason why the bout fell apart.

Of course, keeping quiet isn't exactly easy for McKee. The 41-year-old lightweight has been known to make somewhat outrageous claims about his own abilities, which he feels were largely unappreciated for most of his career, and recently called the UFC the "new slave masters" after being cut from the organization following a decision loss to Jacob Volkmann in his Octagon debut at UFC 125.

But this time, McKee said, he's resisting the urge to make a media splash on the subject of DREAM and Aoki.

"I'm just going to plead the fifth right now until it kind of cools off. I seem to be a very hot topic right now in the community of MMA, so I got to be a little more careful about what I say. I'm very verbal and I shoot it straight from the hip, but this is a situation where I'm going to shut my mouth because I think that's best for my career."

The next step in that career, according to McKee, is a fight with Rafaello Oliveira at CCF Bushido in Canada on July 23. And once that's done?

"I would like to take the fight with Aoki right after that, if possible," he said.