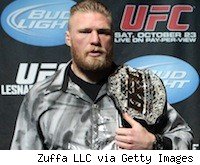 The fallout from some recent high-profile injury withdrawals continues in this edition of the Twitter mailbag, and some of you are simply not willing to take 'I'm too hurt to fight' for an answer.

All that, plus some speculative matchmaking and amateur psychoanalyzing in today's bag. Let's get to it, shall we?

@Farooq09 With all do respect to Brock Lesnar and I wish him well in recovery, but doesn't Carwin vs dos Santos make for a better fight?

From a pay-per-view sales perspective, the loss of Brock Lesnar is downright tragic. But from a purely pugilistic standpoint, I have to agree with you. For one thing, Carwin-dos Santos seems like a fight where someone is guaranteed to get his head knocked off, so there's that. But for another, I think it can tell us more about both men than JDS-Lesnar would have.

Carwin, like Lesnar, has the ability to test dos Santos' defensive wresting skills. We know the guy can bang, but he's yet to face someone with a truly threatening double-leg in his arsenal. Particular as a heavyweight, he's the type of fighter who will live and die on takedown defense.

Unlike Lesnar, Carwin can also knock you out on the feet, and he can take a punch. Lesnar gets hit and then suddenly remembers that he left the stove on at home. Carwin had his nose relocated to the side of his face by Gabriel Gonzaga, and it only made him slightly peeved. That's why I think it's a tougher fight for dos Santos, and a more exciting one for fans.

The trouble with Carwin is, we still don't know if he can be as tough in the second round as he is in the first, or if he can handle an aggressive striker. These, among other questions, should be answered shortly. Personally, I can hardly wait.

@steampunk22 With UFC's new insurance for training camps, how much of an increase will we see in fighters dropping out of fights? And will we see progressively minor injuries causing fighters to drop out, now that they have a safety net in place.

I hear this concern popping up a lot lately, but it makes very little sense to me. It's not as if there are many pro fighters who are only doing this sport so they can afford hospital visits. These guys want to fight, and they know they need to fight. Whether the UFC pays for their doctor bills or not, they aren't making any money convalescing on the couch.

If anything, the insurance probably means that more fighters will be willing to get training injuries seen to before they become a serious issue. It also means they won't have to limp their way through a sorry performance just to get a ride to the ER. That means healthier fighters on fight night, which means better fights for the fans and longer careers for fighters. If the high cost of health care was the only thing motivating fighters to get in the cage at the appointed hour, the UFC wouldn't be able to keep a single Canadian on the roster.

@taylorloyal When the main event / title fight is scrapped from a PPV, is it still fair to charge the same price? #UFC130

Absolutely. Just like it's fair for fans to refuse to pay that price if they don't think it's worth it.

@sephiroth872 Do you believe Zuffa has been pursuing the insurance thing for years like they say, or is it because of the monopoly thing?

Zuffa won't say exactly how much it costs to insure over 300 professional fighters, but I'm going to go out on a limb here and say it isn't cheap. Finding a plan that works for the needs of pro fighters without torpedoing the bottom line is no easy task. I worked for the IFL back when it provided health insurance to fighters, and there were days when I thought our CFO would have jumped out of a window if it wouldn't have negated all that cash he'd dropped on life insurance over the years.

Maybe Zuffa could have made this happen sooner, and the timing certainly suggests that ulterior motives might have played a factor, but this isn't something you figure out overnight.

@JeffTheJeff mailbag: assuming he isn't just an idiot, what is Bob Reilly's motivation to block MMA in New York? What is his real agenda?

I don't think Reilly is an idiot, but the more he explains his opposition to MMA, the more it becomes clear that he's no genius either. His economic arguments against allowing the sport in New York are mathematically challenged at best, and his ethical stand against violence seems bizarrely limited to live MMA events alone. If he's so worried about violence begetting violence in our society, why isn't he similarly opposed to boxing and football and re-runs of Walker: Texas Ranger? Why does he think that live MMA will harm New Yorkers in a way that televised MMA hasn't?

But then, these are simply the gaps in reasoning we ought to expect from a person who seems to have decided on what he's against before figuring out why. Now that he's adopted the position, I guess he has to stick with it. As for why he decided to take such a hard line stance on it in the first place, I can't say for sure. All I can say is that if he hadn't, most of us would still have no idea who Bob Reilly is. For some people, that's motivation enough.

@coldplay0484 What does the main event at UFC 130 mean in the light heavyweight division?

That depends on who wins. If "Rampage" Jackson comes out on top – and I suspect he will – he could conceivably challenge for the light heavyweight title soon, if only because he can talk his way into enough pay-per-view buys when he feels like turning on the charm (for lack of a better word).

If Hamill wins, I don't know how many people would really feel the need to see Jones-Hamill II. Sure, Hamill technically won the first meeting via disqualification, but we all saw where that one was headed. Even if he puts Jackson away he has more work to do before getting a title shot.

@ZachLambertMMA If and when Hardy loses to Lytle, is he getting cut?

I wouldn't be quite so sure that Hardy is a doomed man against Lytle, but okay, it's still an interesting question. If he loses to Lytle that will be four straight, and that seems like a skid that no amount of charisma can salvage. The UFC likes Hardy, and it's nice to be liked. Eventually though, you have to win some freaking fights, and Hardy is definitely at that point.

If the fight with Lytle is a bonus-worthy affair – if it is, in other words, as exciting in practice as Hardy-Johnson was in theory – then I think he sticks around even with a loss. If he gets smoked for a fourth straight defeat, or loses another ho-hum decision, then I think the UFC has to cut him, if only to show that the rules still apply even if you're a fun guy to have around.

No offense to "The Huntington Beach Bad Boy," but if those two ever found a way to fight I suspect that Ortiz would end up on the business end of the Mitrione Minute. Mitrione is too big, too athletic, and not hindered by a litany of injuries. Fortunately, Ortiz is too savvy to take that fight, or at least too savvy to actually show up for it.

@Maggiehendricks Assuming that you didn't have a complete lack of skill or strength, which fighter would you fight and why?

First of all, how dare you.

Second of all, in this hypothetical world that you imagine, I assume that I would still be roughly the same size I am now, which is about 185 pounds. In that case, I'd cut to 170 (with help from the Dolce Diet, of course) and fight Mike Swick. I once handed him a brutal beating in bowling, and since he was a good sport about it, it seems only fair to allow him to return the favor. Please, Mike. Be gentle.

@crinow my guess is Brock never intended to fight junior and was paid big money by Dana to boost TUF ratings. Care to address?

Sure, I'll address that statement, only I'd like to do it with a question of my own: do you buy your tinfoil hats from a special online store, or do you make them yourself?

@acneilson mailbag: should they put the rashad [evans] vs. [jon] jones fight back on?

Ideally, yes. But it's not going to happen because the UFC has already shuffled this deck enough, and now just wants to get on with it and see where the cards will fall.

Jones' camp handled this situation in exactly the wrong way. When you pull out of a fight to have what you admit is essentially an elective surgery, and then decide not to have that surgery once your former opponent has a new dance partner, it sends all the wrong messages. His explanation may be entirely legit, but if you don't want to look like you're ducking Evans the thing to do is to come out and, in the same breath that you announce you're not having surgery, demand a fight with him.

Jones didn't do that, so now he takes an unnecessary PR hit shortly after the biggest win of his career. What's worse, while he takes time off to let his hand heal, Evans gets a chance to shake off the ring rust against Phil Davis. And so the worm turns.

@punkcurmudgeon are guys training too hard, too much, or fighting too much? So many injuries lately outside of fights

Injuries will always be a part of the sport, and so too will injury withdrawals, particularly in big fights with a lot on the line.

That said, I think a lot of MMA fighters are overtrained. Many of them see one trainer for their stand-up game, another for their ground, a third for strength and conditioning, and the net result is that they get pushed by people who have little to no idea how hard they're pushed by others. That's not the case with every fighter – and it isn't the root cause of every injury – but certainly it's to blame in some cases. The drive to succeed is so strong, that many times fighters start thinking that more work is the answer to every problem.

Then again, sometimes they just get hurt because they're in the hurt business. Weirdly enough, spending your days fighting other highly trained humans can occasionally result in unintended consequences.

@bigjim365 who wins in a fight between the mma fighting crew?

@kellycrigger How will the football lockout impact MMA? I think the blue-collar football fan will flock to it personally.

I don't see any way that a lack of pro football this fall wouldn't help MMA in some ways, but it's hard for me to imagine that there are really that many sports fans out there (blue-collar or not, you elitist) who haven't made up their minds about MMA yet. It's like when you see polls of undecided voters two weeks before a big election. What more information do those people need at that point?

Maybe there's a handful of people not watching MMA now who will, in the throes of desperation, turn on some fights the way an alcoholic will drink mouthwash when it's the only alcohol available, but what happens when pro football comes back? They'll probably just run right back into the abusive arms of the NFL, leaving us wondering why we even bother giving them our shoulder to cry on.