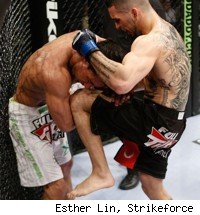 The Strikeforce Challengers 16 fight card will be headlined by prospects Caros Fodor vs. James Terry at the ShoWare Center in Kent, Wash. on June 24.

AMC Pankration's Fodor (8-2), who will have the hometown support, is 3-0 in Strikeforce Challenger events. Terry (10-2) trains under Cung Le and has won five of six of his Strikeforce bouts.

Ryan Couture (2-0), the son of UFC Hall of Famer Randy, will be in action in the co-headliner.