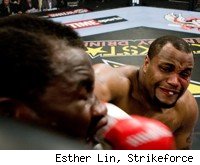 Well-traveled heavyweight Jeff Monson will step in to face prospect Daniel Cormier (pictured) on the June 18 Strikeforce: Overeem vs. Werdum card in Dallas, both fighters have confirmed.

The 40-year-old Monson (42-11) has won his last eight fights all within the past 10 months. The American Top Teamer is probably most known for challenging Tim Sylvia for the UFC heavyweight title at UFC 65 in November 2006 where he struggled to close the distance against the much taller Sylvia.

Cormier (7-0) of the American Kickboxing Academy in San Jose was a member of the U.S. Olympic wrestling team in 2008 and has been slowly built up on Strikeforce Challengers cards. Making his debut in September 2009, Cormier will be facing his biggest challenge yet in the far more MMA-experienced Monson. Cormier, 32, was last seen taking a unanimous decision over Devin Cole at Challengers 13 in January.

The Strikeforce: Overeem vs. Werdum card from the American Airlines Center features Alistair Overeem vs. Fabricio Werdum and Josh Barnett vs. Brett Rogers in the remaining quarterfinal Heavyweight GP bouts. Also on the card are Valentijn Overeem vs. Chad Griggs, Gina Carano vs. Sarah D'Alelio, K.J. Noons vs. Jorge Masvidal and Gesias Cavalcante vs. Justin Wilcox.