Frankie Edgar Discusses Injury That Forced Him Out of UFC 130 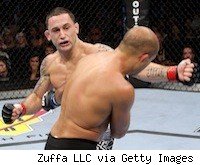 UFC lightweight champion Frankie Edgar has begun treatment for a back injury with what could be a series of shots to address the problem. On Monday's edition of The MMA Hour, Edgar said that the injury that forced him out of his scheduled UFC 130 title defense against Gray Maynard was due to an extreme flare-up of an existing problem.

Earlier Monday, he had an epidural injection to address the pain. It will take up to four days to determine whether it worked. According to Edgar, the ultimate solution is something more invasive, but his doctors are trying to stem the pain and delay what might be inevitable.

"I think eventually I'm going to need surgery," said Edgar, who also suffered a rib injury in training. "Hopefully these shots will slow down the process and give me a couple more years without having to do the surgery."

The shots may prove an effective temporary solution, but if they don't work, he could have another round of shots that will go directly into his nerves.

Edgar said his back issues go back to his past, and that he had surgery 11 years ago. Since then, he occasionally suffered small flare-ups that would knock him out of the gym for a day or two, but about 3-4 weeks ago, he was hit with another flare-up that he quickly realized was far more severe.

He was in such pain that he could barely walk around.

It soon became clear that he would not be able to fight, a disappointment after going through a big portion of his camp.

"It was one of the hardest things to do," he said of his decision to withdraw. "Not only do I not want to let down my bosses, Dana [White], Lorenzo [Fertitta] and those guys. I don't want to let down my teammates. To be honest though, i was having a pretty good camp other than the injuries. i thought I was performing well in practice."

For now, Edgar is in a holding pattern as he waits to see how his body responds to shots. Even if they work, he will likely take off a week to 10 days before beginning light training. Asked how long he might be out, Edgar said he may not be back until the fall, with late summer or longer possibility.

"Just the rest alone made me feel a little better," he said. "I think these shots will help me train at the capacity I need to train."