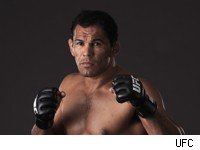 Antonio Rodrigo Nogueira will make his long-awaited return in his home country of Brazil, and it will come against surging contender Brendan Schaub.

The two heavyweights have agreed to face off at UFC 134 in Rio de Janeiro, the UFC confirmed on Monday.

When Nogueira returns, it will mark his first fight in over 18 months. He last performed at UFC 110 in Feb. 2010, losing to Cain Velasquez via knockout. He's been out since after undergoing surgeries on his knee and hips.

Nogueira is 32-6-1 with one no contest overall. His most recent win came at UFC 102, when he defeated Randy Couture via unanimous decision.

Schaub, meanwhile, has won four straight fights after knocking out Mirko Cro Cop at UFC 128 in March. He's won three of his last four via TKO, moving to 8-1 overall.