Frank Trigg: I'm Not Going to Retire, I'm Just Going to Fade Away 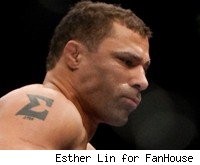 If Frank Trigg had it his way, he would have called it quits 10 years ago, but as the 39-year-old heads into the thirteenth year of fighting, there's no expiration date for his MMA career just yet.

Not that he could set one if he wanted to.

"I'm an adrenaline junkie," Trigg recently said on MMAFighting.com's The MMA Hour. "I love training and I can't stop training."

Trigg attempted to retire in 2006 after a loss to Carlos Condit in the Rumble of the Rock tournament. Less than eight months later, he stopped Jason "Mayhem" Miller to win the IconSport middleweight title.

Trigg might have tried to moved his focus away from competition back then, but he realized training had become more than just a job, it was a lifestyle.

"Even when I was sitting on the couch, drinking two bottles of wine, eating a whole chicken everyday, blowing up to 230 -- which is huge for me -- I still trained," Trigg explained. "I still wanted to work out. I'm one of those guys that is going to work out for the rest of my life."


Trigg says as long as he trains, he'll always improve as a martial artist. He points to his Xtreme Couture teammate Randy Couture as an example of someone who will always train. However, Trigg doubts he'll have the longevity Couture had in the sport.

"Let's be honest, I'm not going to 47," Trigg said. "I don't have the body that Randy does. I probably got maybe three years, two years left."

That hinders, he says, on how well his commentating career progresses -- or even if in the event he finds himself in a drastic career resurgence.

"God forbid, I get on some sort of win streak and all of a sudden I'm back at 185 pounds and they're putting me in the rankings at top 20 and I [find] myself in the top 10 if something like that happens then God, I could find myself fighting till I'm 60."

For however long Trigg does find himself fighting, don't expect him to make a retirement announcement.

"I know in football, baseball, hockey and some of the other guys, they have to announce their retirement because they get paydays," Trigg said. "You get a contract, and when you retire, 'We give you $100,000 as a retirement bonus, or whatever it is.' So those guys have to officially announce their retirement. But I don't have that kind of contract. I'll just go, 'Look, I'm just not going to fight anymore, I'm not going retire, I'm just going to fade away.'"

Next up for Trigg (20-8) is a fight across the pond against Welsh southpaw John Phillps at BAMMA 6 from the Wembley Arena..