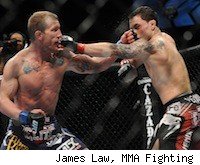 It's been a rough week for the UFC and its fighters. On Monday, MMA Fighting broke the news that both Frankie Edgar and Gray Maynard were injured, canceling UFC 130's lightweight championship main event. On Thursday the UFC announced that Brock Lesnar had a recurrence of diverticulitis and was forced out of his UFC 131 matchup with Junior dos Santos. And on Friday, it was revealed that light-heavyweight champ Jon Jones would not need surgery on an injured thumb, but was still sidelined from training until mid-June.

While the news was bad enough on its own merits, it came with its own accompanying baggage: backlash. The phenomenon is nothing new, but it remains as puzzling as ever. Do these men and women who get in a cage and fight for a living really have anything to prove about their courage?

On one hand, it's easy to understand why the sport's followers would be disappointed when fighters are forced out of action. In the event when an entire match is canceled -- as in the instance of Edgar-Maynard -- it's even clearer. We always hope for the best fights, and are disappointed when they don't happen. But on the other, the accusations that are casually lobbed at fighters afterward are often over the line and border on downright hysteria.

People need to realize that fighters -- especially the top-level ones -- do not make these decisions in a vacuum. They speak to multiple doctors, their management team, and the UFC brass beforehand. When fighters withdraw from a fight, they lose their fight purse, sponsor money, the possibility of a win bonus, nightly bonus, and in the case of major fighters like Lesnar and Jones, they miss out on a small fortune in pay-per-view money. Sitting on the sidelines is an amazingly costly decision that penalizes them much more than time. Still, they often get accused of ulterior motives, or worse, of faking it.

Let's look at each individual case.

In the first, Edgar's injury went largely unquestioned, but Maynard did not fare as well in the court of public opinion. Some felt it was rather convenient that the challenger could get injured at the same time and be forced out of the event as well, thereby ensuring he would stay in line for a title shot.

But in preparation for competition, fighters often keep well-guarded secrets, and Maynard was doing the same. About three weeks ago, he was cut over the eye and needed stitches. Aside from that, he had hurt his knee in training. According to sources in Maynard's circle, he was having a very rough camp, but chose to bull his way through it with a championship on the line. When Edgar pulled out, the decision to do the same was essentially made for him. It's one thing to take a calculated gamble with so much to gain, it's another to do it with so much to lose. It's the law of diminishing returns, as applied to MMA.

In the next instance, a second bout of diverticulitis caused Lesnar to remove himself from a June matchup with Junior dos Santos. Immediately thereafter, there was blowback towards Lesnar, who often seems to be the subject of crazy conspiracy theories. If you think back a few months, you might remember that when the fight was first announced, and then Shane Carwin was announced against a to-be-named opponent, many suggested that Carwin was the contingency plan because Lesnar might pull out.

The truth is that diverticulitis flare-ups are quite common, and that Lesnar was simply betrayed by his own body. Though he gets top-of-the-line medical care at the world renowned Mayo Clinic, he said his doctors couldn't name another professional athlete who was suffering from the disease, which often leaves him in extreme pain, saps him of energy and robs him of the ability to train properly.

The thinly veiled suggestions that Lesnar is suddenly afraid to fight are ridiculous when placed in the proper context of his career. This is a guy who wasn't afraid to try out for the NFL despite not playing since high school, and who jumped into high-level MMA after one year of training.

And finally, the case of Jones is perhaps the most confusing. Jones' announcement was good news: he wasn't having surgery. But people were still angry, because he still can't fight Rashad Evans. Instead, he'll return a month or two later. Essentially, he announced he'd return sooner than originally thought, yet some people are mad about it. Umm, wouldn't this actually be a cause for celebration? Jones saw multiple doctors, and finally, in a follow-up, he found one that told him he could continue on without surgery. But that isn't good enough for some, as though Jones has a medical degree and should have foreseen the solution before it arrived.

When the hype and the man-made controversy of injury announcements are stripped away, the reality of the situation is quite different. It's Maynard rehabbing his knee, Lesnar facing the possibility of surgery, and Jones deciding against surgery so he can return earlier than expected.