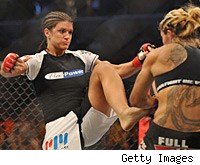 These are uncertain times for women's mixed martial arts. Strikeforce has been the industry leader in female fights, while the UFC has maintained that it has no interest in putting women in the Octagon. So now that the UFC runs Strikeforce, does that mean women's MMA is endangered?

Not necessarily. The Strikeforce women were invited to the UFC's recent fighter summit in Las Vegas, which indicates that Zuffa thinks women have a future within the company, and next month's return of the sport's biggest female star, Gina Carano, will result in a publicity boost for women's MMA.

So as I review the top 10 female fighters in mixed martial arts, I'm confident that it's a list of fighters whose futures are bright. Even if I'm not sure where and when most of them will fight next.

(Editor's note: The ranking from the last time we ranked women are in parentheses)

1. Cris Cyborg (1): Few MMA fans dispute Cyborg's status as the sport's premier female fighter, but the problem is that Strikeforce hasn't been able to find opponents who can give Cyborg much of a challenge. If Zuffa wants to build women's MMA, it has a star to build around in Cyborg. But it needs to find her some good opponents.

2. Zoila (Frausto) Gurgel (2): The Bellator women's 115-pound champion has a new last name after marrying Jorge Gurgel, and she's expected to go back to her old weight class and fight at 125 pounds, which calls into question what Bellator does next. Gurgel isn't expected to fight again until the fall after suffering a hand injury in her last fight, a unanimous decision victory over Karina Hallinan.

3. Megumi Fujii (3): Fujii has fought just once since losing to Gurgel in the final of last year's Bellator tournament, a unanimous decision win that ran her record to 23-1. The best thing Bellator could do is book a rematch of last year's controversial Gurgel-Fujii split decision.

4. Marloes Coenen (4): Liz Carmouche gave Coenen a much tougher test than anyone expected, but Coenen eventually pulled off a submission and showed that she's among the best fighters in the sport at fighting off her back. No word on what Strikeforce plans to do with her next, but she was among the fighters invited to the fighter summit at the UFC offices in Las Vegas.

5. Sarah Kaufman (5): Kaufman bounced back from her loss to Coenen with a third-round TKO win over Megumi Yabushita in April. Giving the 13-1 Kaufman a rematch with Coenen, who took her Strikeforce 135-pound belt in October, would make a lot of sense.

7. Miesha Tate (8): Tate earned a shot at the Strikeforce 135-pound title by winning the four-woman tournament in August, but she had to drop out of her title fight with Coenen in March, and nine months after that tournament victory there's still no word on when Tate will get the title shot she's been promised.

8. Jessica Aguilar (9): In her one fight since losing a split decision to Gurgel, Aguilar needed just 82 seconds to submit Elsie Henri.

10. Rosi Sexton (NR): Her loss to Gurgel a year ago knocked her out of the Bellator tournament before it started, but she's on a two-fight winning streak since then, including a unanimous decision victory over Roxanne Modafferi in February.