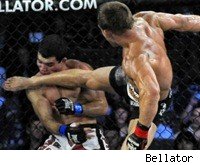 In the biggest fight of his mixed martial arts career, Michael Chandler stepped up with the best performance of his career, defeating Patricky "Pitbull" Freire by unanimous decision in the final of Bellator's lightweight tournament at Bellator 44 on Saturday.

The victory earns Chandler a shot at Bellator lightweight champion Eddie Alvarez, who stepped into the cage immediately after the fight to congratulate Chandler.

All three judges scored the fight 29-27 for Chandler, who had a point taken away after repeatedly landing low blows. Chandler apologized after the fight for kicking Pitbull in the groin, saying he knows he needs to work on his leg kick technique. But that's not all he has to work on: Although Chandler is a good fighter with a solid wrestling background and an 8-0 MMA record, he's not in Alvarez's class. Chandler will need to get a lot better in a hurry if he's going to give Alvarez a competitive fight.

In fact, one of the biggest problems facing Bellator right now is that it doesn't have many strong contenders for its champions. Chandler demonstrated in the cage Saturday night that he's a solid prospect, but Alvarez is widely regarded as one of the Top 10 lightweights in the world. He shouldn't be fighting prospects.

In the night's co-main event, Bellator middleweight champion Hector Lombard put away Falaniko Vitale in the third round with a vicious right hand that saw Vitale stagger, stumble, and ultimately fall to the ground unable to get up. Lombard knew as soon as the punch connected that he had finished Vitale, and he showed good sportsmanship in not continuing to attack as Vitale started to go down. Lombard got off to a slow start in the first two rounds, but his third-round knockout was sensational.

In an undercard fight that made the live MTV2 broadcast because another fight was canceled at the last minute, Giedrius Karavackas pulled off a nifty arm lock to force Sam Oropeza to tap out in the third round of an exciting, back-and-forth battle. Although the fight wasn't slated to be aired, it turned out to be a surprise treat for the viewers at home.

And Alexander Shlemenko beat Brett Cooper by unanimous decision, 30-27, 30-28 and 29-28, in a very entertaining fight that showed once again why Shlemenko, a 26-year-old Russian, is one of the most interesting and unorthodox strikers in MMA. Shlemenko repeatedly connected to Cooper's chin with spinning back fists, and although Cooper showed a great deal of toughness and heart in hanging in with Shlemenko for 15 hard-fought minutes, he never really had an answer for what Shlemenko was doing. Shlemenko, who lost to Lombard in October, said his next goal is to win Bellator's Season 5 middleweight tournament and earn another shot at the champ.