Cain Velasquez: Brock Lesnar Will Be Back; Shane Carwin Right Choice by UFC 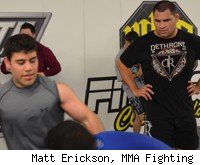 CREST HILL, Ill. – The MMA world got a little jolt on Thursday when the UFC and Brock Lesnar announced the heavyweight's diverticulitis had returned and he was back on the shelf.

Count UFC heavyweight champion Cain Velasquez in with that group. He was waiting in the wings with a careful eye on the planned main event at UFC 131 in June between Lesnar, the former champ, and Junior dos Santos, since that winner would get the next shot at Velasquez.

When the news broke, Velasquez had to shift gears and start thinking about Shane Carwin and dos Santos, even though a fight with either of them is likely at least five months away. Carwin will step in for Lesnar to face dos Santos, currently coaching opposite Lesnar on Season 13 of "The Ultimate Fighter." But after conducting a seminar at Clay Guida's MMA Stop Fitness in Crest Hill, Ill., on Friday, Velasquez told MMA Fighting he believes Lesnar will make another comeback from the digestive disorder – and will be better than ever.

"It sucks, but it happens in this sport," Velasquez said. "People get hurt all the time and pull out of fights. But he'll come back, and he'll come back stronger. It sucks right now, but we already have somebody tough coming up with Shane (replacing him)."

Velasquez, who is still recovering from right shoulder surgery to repair a torn rotator cuff, has been out of action since he beat Lesnar at UFC 121 last October to win the heavyweight title. The Mexican-American, who trains at American Kickboxing Academy in San Jose, Calif., has never lost a round in his MMA career, finishing all but one of his opponents with first- or second-round knockouts or TKOs.

But though he is the current heavyweight kingpin, looking at the landscape in the division, Velasquez believes the UFC made the right move by picking Carwin to face dos Santos for what UFC president Dana White has maintained is still a No. 1 contender fight for Velasquez's belt.

"I think (they made the right call), yeah," Velasquez said. "He was next in line, for sure. He's a tough guy. I think it was a good call."

The "on the shelf" theme Lesnar now joins applies to Carwin, as well. He's been out since his last fight at UFC 116 last July – a title fight against Lesnar that saw him dominate in the first round before gassing and tapping to an arm triangle in the second round. Carwin has been rehabbing since neck surgery in November and was expected back at UFC 131, anyway, against promotional newcomer Jon Olav Einemo.

It's hard to argue the dominance of the four heavyweights at the top of the UFC pack – Velasquez, dos Santos, Carwin and Lesnar. Their combined record is 38-4. Velasquez is unbeaten and, so far, basically untested in his 9-0 career. dos Santos hasn't lost in three and a half years, an armbar in his native Brazil in his sixth fight. Carwin's only loss came to Lesnar. And Lesnar's two losses came to Velasquez and former champ Frank Mir, a now-famous kneebar in his second pro fight.

Though dos Santos trains with some of the world's top Brazilian jiu-jitsu fighters – the Nogueira brothers and Anderson Silva included – at Team Black House, he has yet to showcase his ground skills in the UFC. Carwin has a collegiate wrestling pedigree that hasn't been seen thanks to four knockout wins in the UFC. But Velasquez believes despite their secondary skills, this one is likely to stay standing.

"Before (with Lesnar-dos Santos), it was wrestler vs. striker," Velasquez said. "Now it's striker vs. striker – but they're different. I think dos Santos is more technical and hits hard, but Carwin is a really hard puncher. You can't pound him out. So it's two hard hitters."

And even though he was staring down the barrel of a possible second straight fight against Lesnar, had the crossover former WWE star been able to fight next month and win, Velasquez said he's in a position now as champion to have to think about just about everyone eventually.

"(Lesnar is) the type of guy that will always come back stronger," Velasquez said. "You go back, look at the film, see what you did wrong and go back and work on it. But I've always thought about both (Lesnar and Carwin)."

After finishing up this week's UFC Fighter Summit in Las Vegas and high-tailing it to Chicagoland to give some hands-on MMA instruction to more than 50 temporary students, Velasquez now turns his attention to his upcoming wedding and honeymoon. And after that, a careful eye on the UFC 131 main event. He said his shoulder is just around the corner from being fully healed.

"It's not 100 percent now," Velasquez said. "The doctor said I can start training now, but I can't punch with the right hand and I can't wrestle full-go. But there's lots I can do now, and they said by the end of June I can be full-go. So I'll have a lot of time to train."

Though not official, White said after UFC 129 in Toronto the UFC's planned trip to Houston for a pay-per-view on Oct. 8, coinciding with the next UFC Fan Expo, would be a logical place for Velasquez to make his return, now against the dos Santos-Carwin winner. And Velasquez confirmed that him main eventing in Houston looks like the most likely course.

It makes sense, given the UFC's heavy marketing push before UFC 121 of Velasquez trying to become the first Mexican heavyweight champion in MMA or boxing history. Velasquez's father is from Mexico, though Velasquez was born in the United States. Houston, the nation's fourth-largest city, has the country's third-largest Hispanic and Latino population. Velasquez said fighting there would be great – until the increasingly global UFC is finally able to do an event in Mexico City.

"(Houston is) great – just like Anaheim and L.A. It's a great place for me to fight, so I'm happy for that," Velasquez said. "But in the future, for sure – I definitely want to fight (in Mexico) before my career is over."