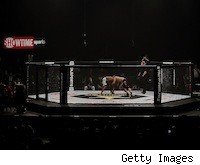 It's been two months since UFC parent company Zuffa purchased rival promotion Strikeforce, and the company continues to increase its presence in its secondary brand by placing more of its personnel in key roles.

The latest changes have come via subtraction. According to multiple sources with knowledge of the situation, several Strikeforce employees have been let go in the last week, the result of duplication of job duties brought about by the marriage of the two companies.

Prior to their purchase, Strikeforce had a small staff of just 12 people who worked under CEO Scott Coker. Among that group, only two full-timers remain, and two others have been retained as consultants. The highest-profile of the layoffs was matchmaker Rich Chou, who Coker once said was the man most likely to replace him and run the organization some day. Chou was replaced by former WEC matchmaker Sean Shelby.

Through a company spokesperson, UFC officials declined comment on the changes.

Despite his now-infamous "business as usual" description of the transaction's aftermath, UFC president Dana White made no long-term promises about keeping Strikeforce employees when he first announced the purchase.

"At this point in time, we're not planning any changes," he said then.

Still, several employees were surprised by the swiftness of the regime change and the ensuing layoffs. Two months after the purchase, the hands-on team at Zuffa's Las Vegas-based office has the reigns as they continue to re-shape Strikeforce. Coker, now listed as Strikeforce executive vice president and general manager, continues to be based out of San Jose, California.

After a two-month break, the next show for the re-tooled organization comes on June 18, when the Heavyweight Grand Prix resumes with two fights in Dallas.