UFC Refuses to Pay for Extra Policing at UFC 131 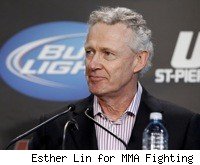 The UFC has turned down the Vancover Police Department's request to pay for extra policing around Rogers Arena on the night of UFC 131.

Tom Wright, UFC Canada's director of operations, informed MMA Fighting via e-mail that the he responded to the VPD on Thursday.

"I spoke with the VPD [Thursday] and advised them that we would not be funding any 'expanded police presence' for community areas in the general vicinity of the Rogers Arena," Wright wrote.

"I explained that while we remain supportive of law enforcement in every city we bring shows to, we weren't prepared to be 'treated differently' than other events/concerts/shows (Canucks, Rolling Stones etc). This is a particularly important consideration when 'incidents' at UFC events are typically fewer than other big events. As I explained, if I were the Chief I'd be more worried about Canuck fans (celebrating or crying in their beers) than UFC fans."

Late last month, police chief Jim Chu announced that the VPD had requested the UFC pay for extra policing because, according to a report in The Vancouver Courier, "residents complained of public drinking, rowdy drunks and public urination before and after the UFC event" held last June in Vancouver.

"We're going to talk to the promoters about paying for policing outside the venue in order to have extra patrols in the neighborhood to prevent what might occur in terms of neighborhood problems," Chu told the Courier. "Within a week or two before the event, we'll have a good idea of what we'll deploy within the stadium and outside."

The VPD didn't respond to a request for comment on the situation.

By all accounts, the UFC's first trip to Vancouver last year for UFC 115: Liddell vs. Franklin was a success: the tickets sold out in just 30 minutes, drawing a crowd of 17,669 and a gate of $4.2 million (USD).

However, an incident involving a gay couple on the same night of the event was blamed on the UFC being in town, despite no substantial proof of the two being connected in any way.

The Vancouver Canucks, who are the main tenants at Rogers Arena, are not responsible to pay for policing at their home games.

And while it's unclear if the VPD will decide to pay for the extra policing themselves, they have already announced that portable toilets will be placed around the arena on fight night and public service announcements will be made during the event to "respect your host community."

UFC 131, which takes place on June 11, will now be headlined by Junior dos Santos vs. Shane Carwin after Brock Lesnar pulled out of the fight Thursday.