Mark Coleman: 'Fighting Was a Dream, and I Lived the Dream' 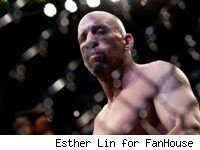 When Randy Couture said his goodbyes and walked out of the cage for what he would have us believe is the last time in his pro fighting career, Mark Coleman stood there with the 55,000 fans in the Rogers Centre, and just like them he felt a range of emotions swirling inside him.

"I felt a lot of different things," Coleman said. "Randy's somebody who I don't have a bad word to say about, who helped me a lot in my career, who opened his gym to me. I don't know if you want to use the word hero, but yeah, he was sort of a personal hero of mine."

He was also a contemporary of Coleman's from the early days of MMA, and a fellow UFC hall of famer. And now here he was, just a little over a year removed from a win over Coleman at UFC 109, and he was calling it quits. When you're a 46-year-old pro fighting legend watching one of your peers hang up the gloves, it's the kind of thing that makes you think.

The last time Coleman stepped in the cage was at UFC 106 last February, when he got submitted by Couture in the second round of a fight he was never really competitive in. The loss still eats at him a little, he can admit now. He was out-worked in the gym in the weeks leading up to it, and then out-fought in the cage on fight night.

Coleman made the trek to Toronto for UFC 129 to make appearances and sign autographs for MMA Elite at the Fan Expo. It's both "humbling and amazing" to him that so many fans still want to take their picture with him, he said, though the same question keeps popping up in those scenarios.

"People will ask, 'When are you fighting again?'" said Coleman, who was released from the UFC following his loss to Couture, but never made any official retirement announcement. "I'm not sure if I'm done or not yet, but I do feel the repercussions of 30 years of wrestling and fighting."

In the last few fights of his career he didn't always train as hard as he should have. Sometimes it was a lack of motivation. At other times he didn't have the money or the access to the kind of facilities he needed in order to have a true training camp. There's only so far you can go at the highest level of the sport when you're working out in your living room.

Which is not to say he's ruling out any potential return to action. Hearing Dan Severn call him out does get the competitive juices flowing again, he admitted, and the two enjoyed jawing about a potential rematch when they visited the troops in Afghanistan together recently.

"Me and Dan, we didn't miss a meal," Coleman said. "The troops in Afghanistan, they're eating well, let's just say that, and me and Dan were right there with them. ...He kept saying, 'You know Mark, nothing personal, but I'd like to fight you again.' That one does interest me, but I told him he's going to have to drop a few pounds first."

But as for continuing on against no-name opponents in regional promotions? That's not something Coleman's terribly interested in, he said. Instead he's begun to turn his focus to life after fighting. There's been talk of opening a gym in his hometown of Columbus, Ohio, he said, and also of doing a local sports radio talk show.

In short, he's looking for a way to make a living and be involved in the sport, but without strapping on the gloves and taking any more unnecessary abuse.

"I have no choice," he said. "I'm 46 and the body's breaking down. Fighting was a dream, and I lived the dream. Looking back on it, all these guys out there, these young guys, you're going to look back and realize you were living a dream. Is it tough? Heck yeah, it's a tough way to make a living. But it was great."

Things like this week's Zuffa 'fighter summit,' or the newly announced health insurance plan for UFC and Strikeforce fighters, that's all great stuff, Coleman said. He wishes it had been around when he was coming up. But the fighters from his era never made the big paydays that current stars get, even though it was their blood and sweat that helped lay the groundwork for today's crop.

"It's easy to spend money, but a lot harder to save money," he said. "You hear about it in every sport. How do you adjust when it's over? A lot of people don't. A lot of my good friends from the past, we're all trying to figure it out."

As for Coleman? Well, a part of him is just happy that fans of the sport still recognize what he did. The fact that anybody remembers his victorious debut at UFC 10, or even his run through the Pride 2000 Grand Prix, seems just a little bit incredible to him now. Accomplishments like that from the dark ages of the sport, sometimes they seem to fade into the ether with no one to hype them incessantly on cable TV like the heroics of today's fighters.

These days, Coleman said, his main goal is to try and "give something back." More and more it seems like his hard-won wisdom might be the best gift he has to give.

"I see those young fighters at small shows where I do appearances and I ask them, what's your plan? They all say, 'I want to fight in the UFC.' Well, I'm glad they say that because you've got to set your goals high, but what's your plan beyond that? You've got to think past that to what comes next."

And as for those fighters who are in the glory days of their careers right now? The ones who can't even bring themselves to imagine a time when they won't be the agile, invincible fighters they see in the mirror in the morning? Coleman has some words for them, too. He knows, because he used to be them. So did Couture. But nobody stays young forever.

"You've got to realize that you're living the dream and the clock is ticking," said Coleman. "It will tick fast, too. The next thing you know, it's over."