Gus Johnson: Any MMA Fighter Would Kill Pacquiao In the Cage 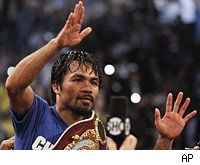 Gus Johnson, the broadcaster who called the blow-by-blow on Manny Pacquiao's victory over Shane Mosley and who also calls Strikeforce fights on Showtime, has weighed in on the frequently discussed subject of how a boxer would do in MMA. And he doesn't like any boxer's chances.

In a radio interview with Dan Patrick, Johnson was asked how Pacquiao would do in an MMA fight against an MMA fighter, and Johnson said it's ridiculous to even think Pacquiao could last.

"He'd get killed," Johnson said of Pacquiao in the cage. "No question. Tapped out, easily. In a minute."

Johnson's opinion may be influenced by what happened when James Toney stepped into the Octagon with Randy Couture, as Couture easily took Toney down and submitted him in a joke of a fight last year.

But if Pacquiao were actually going to train for an MMA fight, working on takedown defense and checking leg kicks, I think he'd have a decent chance against some UFC bantamweights and featherweights. Pacquiao isn't the out-of-shape, past-his-prime Toney. Pacquiao is the best boxer in the world and capable of knocking out anyone wearing four-ounce gloves. It would be fascinating to see how he'd look in MMA. We'll obviously never see it, as UFC paydays don't come anywhere close to the tens of millions of dollars that Pacquiao makes, but Pacquiao in the cage would be more interesting than Johnson seems to think.

Johnson also confirmed that he will, in fact, continue calling MMA for Showtime, even though he left Showtime's sister company CBS and is now calling football and basketball for Fox.