Einemo vs. Herman, Beltran vs. Rosa Rounds Out UFC 131 Card 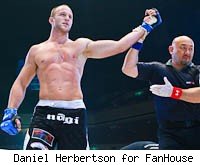 In a battle of UFC newcomers, the Norweigan Einemo will now face Dave Herman at UFC 131. The UFC announced the news on Twitter Friday afternoon.

As a result, Joey Beltran, Herman's original opponent, will now face veteran Aaron Rosa, another UFC newcomer, on the undercard of the June 11 event.

Einemo (6-1) made his MMA debut in 2000 and won his first five fights in a row in the first round. He lost his first fight to Fabricio Werdum at PRIDE 31 in 2006. After defeating James Thompson later that year, Einemo abruptly left MMA.

The Brazilian jiu-jitsu black belt, who is a part of Team Golden Glory, is the only man to defeat multiple-time BJJ champion Roger Gracie in the ADCC tournament. He went on to finish first after beating Gracie in the semi-finals of the 88-98 kg weight division.

Herman (20-2) has won five of his last six fights. "Pee Wee" has fought for EliteXC, Bellator and Sengoku.

Meanwhile, Beltran (12-5) has lost his last two fights in a row to Matt Mitrione and Pat Barry. Prior to those losses, "The Mexicutioner" had won his first two UFC fights in a row.

And Rosa, who was supposed to fight Seth Petruzelli at EliteXC: Heat before Petruzelli was moved into the main event against Kimbo Silce, enters his UFC debut riding a four-fight winning streak and an overall record of 16-3. The veteran most recently beat Abe Wagner at Titan FC 17 in March.