With Contender Fight Shake-Up, Lesnar's Misfortune Could Be Carwin's Gain 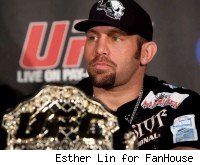 By the time UFC heavyweight Shane Carwin got the news it was already well on its way to becoming the top story of the day: former UFC champion Brock Lesnar was forced out of his UFC 131 bout with Junior dos Santos due to a recurring case of diverticulitis.

And as Carwin found out when he finished up his conditioning workout and started returning a slew of missed calls, that same number one contender fight was now his.

"Junior is a serious fight and not the type of fight that you would normally take on a 30 day notice but I have a dream to chase and I do not have a lot of time to chase it," Carwin wrote on his blog Thursday afternoon. "This is an opportunity to put myself in contention for the title. I know my Coaches will have me ready so I have everything to gain."

Perhaps no one is more excited than head Grudge Training Center coach Trevor Wittman, who got the call from the UFC when Carwin was too busy working out to hear the good news, and who has spent the last few weeks dropping hints to Carwin that he should be prepared for just such an opportunity.

"I've been in this game long enough to know that something like this was very possible," Wittman said. "Now that it's happening, I'm so excited. I'm out hanging out with my dad right now and I just want to go home and study tape."

There's no time to waste, as UFC 131 goes down in Vancouver just 30 days from now, but Wittman said it's plenty of preparation time for a fighter like Carwin, who's spent the last several weeks preparing to fight Jon Olav Einemo on the undercard.

"The thing is, it's a whole different opponent," Wittman said. "Different size, different height and reach, different style. [Einemo] was world-class on the ground, so that's a different type of fight. Dos Santos comes right at you throwing one shot after another."

The upside is, there's now much more for Carwin to gain with a win. The Einemo fight was supposed to be a comeback bout of sorts, since Carwin hasn't competed since last July. He took his time to rehab after neck surgery, and was just getting ready to climb back in the cage for the fight with the Octagon newcomer after months of work just to get back into fighting shape.

Now, due to Lesnar's illness, he'll get the chance to take on an established fighter in a bout in that will, according to Carwin's manager, Jason Genet, be for number one contender status in the UFC's heavyweight class.

"The implications of the bout are the same, just Shane filling in for Brock," Genet wrote in an email to MMA Fighting. "Winner will get title shot."

It seems as though the change of opponents might also inject some new life into the training camp in the final month of preparation, just when things can sometimes start to feel stale and monotonous.

As Wittman explained, "Shane's so funny, because when I was talking to him on the phone he said, 'Coach, now I feel excited. Now I feel hungry.'"

While it's bad news for Lesnar, whose health problems threaten to be an ongoing issue that plagues his fighting career, it's a chance for Carwin to leapfrog the competition and get back in a heavyweight title fight sooner rather than later.

As Carwin put it on his blog: "My manager said 'This is where you belong' and I am going to make sure I do everything I can to prove him right."