Ramsey Nijem on Game Planning for Next Fight With Clay Harvison 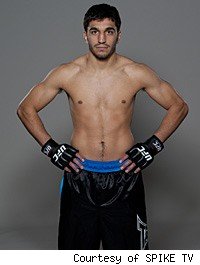 With the first round of fights all out of the way on this season of The Ultimate Fighter, Ramsey Nijem has advanced to the quarterfinals and learned on this week's episode that he'll be taking on Clay Harvison next. In his weekly interview with MMAFighting.com, Nijem said that was a matchup he liked -- but not the matchup he requested.

Nijem talked about his game plan for Harvison, which member of Brock Lesnar's team he would have preferred to fight, and how he felt about the wild card fight between Chuck O'Neil and Javier Torres.

Nijem also weighed in on the annual coaches' challenge, which this year meant Lesnar and Junior dos Santos going through an obstacle course on Fertitta Field at Bishop Gorman High School in Las Vegas.

Michael David Smith: Let's start at the end of this week's episode: You found out you'd be fighting Clay Harvison in the quarterfinals. How did you feel about that?
Ramsey Nijem: It seemed to me like it would be a good matchup because I'm a wrestler and he's a stand-up fighter, and I knew my game plan would be to wrestle and grapple and play to my strengths. I thought it was a fight I could win.

At this point in the taping of the show, you guys hadn't been there that long. Were you able to learn enough about the other guys to get a feel for what kind of opponent Clay would be?
We knew enough. I had seen him fight the one time when he beat Mick Bowman, and even though we had only been there a couple weeks, when you're around the person all the time you get to know them pretty well. I knew closing the distance and taking him down and trying to get his back would be my best chance of beating him, and that's what I would go in there and try to do.

Did they ask you who you wanted to fight, and did you have a preference?
I really had no idea who I'd fight, but I actually asked for Chris Cope because I thought that would be the easiest fight for me and I wanted to fight him. But Dana White just came out and told me I was fighting Clay, and that was fine.

In the fight we saw on this week's episode, Chuck O'Neil submitted Javier Torres in the second round with a D'Arce choke. I thought it was a pretty good fight. What did you think?
Very entertaining fight. Chuck really showed his true colors. He went out, was real aggressive and went after the win. I liked Chuck and Javier both a lot and that made it a hard situation. I didn't want either one of them to lose. It was a fun, exciting fight and I was glad Chuck was able to show what he could do.

What did you think of the coaches' challenge, Brock and Junior on the football field?
At first we thought it was rigged. Junior had never played football -- he had never even thrown a football -- and we all knew Brock had played football, even tried out for the NFL, so we were actually upset when they took us out there to the football field. Junior was all, "I have never played this game." But once we saw that it was a race to see who was faster, we thought Junior had a chance. It was funny, Junior was nervous leading up to it, when we first found out there was going to be a coaches' challenge Junior seemed like he was more nervous about that than he ever has been for an actual fight.

Junior winning the challenge meant you got $1,500. Did you do anything special with it?
I bought myself a big screen TV. I wanted to get a little present for myself. I had an old TV that made a buzzing noise, and now when I watch the UFC I can do it on my flat screen.