Mike Dolce Not Working With Quinton 'Rampage' Jackson for UFC 130 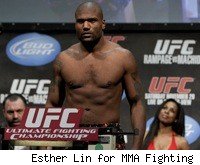 Mike Dolce, one of the key members of Team Quinton "Rampage" Jackson for the last couple of years, has not been helping Jackson prepare for his UFC 130 fight against Matt Hamill.

Dolce, a fighter who was a cast member on the seventh season of The Ultimate Fighter but has gained notoriety as of late for his work as a nutritionist and strength and conditioning coach, had been working closely with Jackson since his UFC 92 fight against Wanderlei Silva.

The pair didn't have a falling out, however, Dolce was just already booked to work with Thiago Alves for his fight against Rick Story at the same event.

"Business-wise, it's a great problem," Dolce said on Monday's episode of The MMA Hour, "but as a friend, emotionally, it's really hard for me. I had a really tough time with that. I felt like I was leaving my friend; I was leaving my team behind in moving on with my professional responsibilities."

Dolce said he asked Jackson if he had any fight plans coming up prior to agreeing to work with Alves for this event. At the time, Jackson said he was only planning on fighting again in the summer and gave Dolce his blessing to work with someone else for UFC 130.

"What he's doing for this fight with Matt Hammil, I'm out of that picture right now because I'm here with Thiago for the last month or so. But [Jackson] is a different guy. You know, Quinton was winning in PRIDE on McDonald's, he was eating McDonald's twice a day in PRIDE when he fought Wanderlei in those fights. When he beat Chuck [LIddell] he was living off fast food and Subway, Wendy's and Sonic.

"So you can never count Quinton out, he's just such a talent. But at the same time, I would love to be there. I think I bring some things to the table, and I can help bring out that championship performance out of him."

Dolce, who holds an MMA record of 4-10, lives with his client to help them prepare for a fight, which would have made it impossible for him to work with both Alves and Jackson at the same time.

"With Quinton, it's a little harder to have that constant communication. He's a big star and he has a lot of people around him and sometimes it's hard to get him to look me in the eye, let's say, and really have that coach/athlete discussion. So I kind of handed off that responsibility to some people that can be on the ground with him and deal with him on a 24-hour basis."

Jackson turned down an opportunity to fight Shogun Rua for the light heavyweight title on six weeks' notice after Rashad Evans withdrew from the fight due to a knee injury. Instead, Jon Jones stepped in and, well, you know how that went. Jackson cited poor timing and his weight for turning down the fight.

The former UFC light heavyweight champion has been known to gain weight between fights, which is why Dolce had been such a key member of his team.

But there are no hard feelings between the two, and Dolce expects to be working with Jackson again the next time he fights.

"I love the guy. He's one of my best friends in the whole wide world. We have a very strong bond."