Brock Lesnar Out of UFC 131 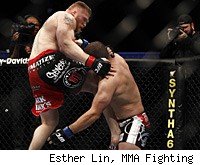 In a blockbuster announcement Thursday afternoon, UFC President Dana White revealed that Brock Lesnar is once again suffering from diverticulitis and will not be able to fight at UFC 131. Instead, the main event on that fight card will be Junior dos Santos vs. Shane Carwin.

"I want to thank the UFC, I want to thank Mr. White and I want to apologize to Junior dos Santos and Spike TV," Lesnar said. "This is an unfortunate situation for me. I dodged a bullet about two years ago with diverticulitis, at that time not knowing what the problem was. ... Diverticulitis is something that never goes away. It's something I've dealt with since the first occurrence and I've been battling it."

Lesnar said that he has been feeling sick for three months and has been on antibiotics, and that "It didn't allow me to train to my full capabilities. I was forced to make a decision to go back to the doctor this week." Lesnar said he spent 14 hours talking to doctors at the Mayo Clinic this week, and although he insisted that the illness won't end his career and that he won't retire from MMA, he said there's simply no way he can fight as scheduled in June.

"It wouldn't have been fair," Lesnar said. "My health is No. 1, my family is No. 1 and it was a hard decision. I'm choked up about it and there's nothing I can do."

Lesnar said White has been "first class" in his support through this relapse of his illness. White said he told Lesnar to make sure his personal health was his top priority.

"He was all bummed out about pulling out of the fight," White said, "I told him, 'Don't worry about the fight.' ... I'm glad it's not life-threatening."

For the UFC, losing the Lesnar-dos Santos bout is a major blow: This season of The Ultimate Fighter has been devoted to building up the two coaches, and it was expected to be one of the UFC's biggest pay-per-views of 2011. Instead, the UFC has now lost that main event, just a week after losing its UFC 130 main event of Frankie Edgar vs. Gray Maynard.

But while the news is bad for the UFC, Lesnar sounded an optimistic note about his future. Although he doesn't know when he'll be healthy enough to return to the Octagon, or whether he'll need surgery, he is confident he'll return eventually.

"I love this sport and I love what I do," Lesnar said. "This isn't the end of Brock Lesnar."