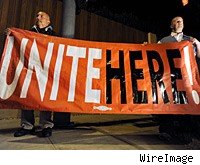 UNITE HERE, of which the Hotel Trades Council is a member, represents 120,000 active and retired members throughout New York State in the hospitality, gaming, and restaurant industries, strongly opposes S01707A.

S01707A proposes to amend chapter 912 of the laws of 1920 relating to the regulation of boxing, sparring, and wrestling, in relation to legalizing professional combative sports events in the state and to amend the tax law to impose a tax on such events. In its current form, S01707A would allow the Ultimate Fighting Championships (UFC), which has achieved nearly a monopoly position in the sport of mixed martial art, to dictate abusive and exploitative contract terms with fighters. On March 14, the UFC's parent company also purchased Strikeforce, the second largest mixed martial arts promoter. This could potentially make it even more difficult for professional mixed martial arts fighters to negotiate fair contracts.

• Unlike in boxing, where both federal and New York State laws have been passed to protect the athletes from exploitative and coercive promoter contracts, mixed martial arts fighters do not enjoy "outside-the-ring" protection from unscrupulous promoters. In 2000, Congress enacted the Muhammad Ali Boxing Reform Act (Ali Act) to protect boxers from "exploitive, oppressive, and unethical business practices" in an industry that lacked (and still lacks) both a central body to establish standard business practices and an athletes' union to negotiate collective bargaining agreements. In 2003, New York passed a similar bill (S. 3016) to amend chapter 912 of the laws of 1920 to ban certain contracting practices that would give the promoter unfair control over the career of a boxer. Boxing and mixed martial arts have similar economic models. In each, the fighter is dependent on the promoter to make fights and to provide him with a livelihood. However, in mixed martial arts, there is also no central industry standard-setting body or a fighters' union. Given these similarities, strong legal safeguards against abusive and exploitative contracts between a promoter and a fighter should be carefully examined before mixed martial arts events are legalized in this State.

• In the largest mixed martial arts promotion, the Ultimate Fighting Championships (UFC), fighters have spoken out against coercive contract provisions that lead to perceived unfair fighter pay. There have been high-profile controversies in the UFC over issues of fighter pay and other contract disputes. The standard UFC contract (as of 2005) contains certain provisions that seem abusive. For example, (1) the "championship clause," which extends a champion's contract automatically; (2) automatic extension when fighting in a non-UFC event; (3) fighters are employed as independent contractors but must fight exclusively for UFC during the length of the contract; or (4) fighters are typically required to relinquish in perpetuity all rights to his own image and likeness, not just those related to his UFC bouts (thus losing all future revenue streams from DVD sales, video games, and other merchandizing.). Such exploitative contract provisions should not be allowed in mixed martial arts or any professional sports conducted in the State of New York.

In conclusion, any bill to legalize mixed martial arts in New York should be the standard in the sport and include strong legal protection for fighters against abusive and exploitative contracts.