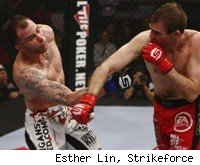 Couture (2-0) began his professional MMA career at Strikeforce Challengers 10 last August, submitting Lucas Stark with a triangle choke in 75 seconds. His second fight this past February took a little longer, but also resulted in a submission when Couture finished Lee Higgins with a rear-naked choke in the third round.

Ricehouse (4-0) began fighting professionally in January 2010 and has competed twice on Strikeforce undercards. His wins have come by two TKOs, a submission and a decision.

Here's the rest of the Strikeforce Challengers 16 lineup, airing live on Showtime at 11p.m. ET.