'Rampage' Jackson to Receive 'In the Moment' Treatment 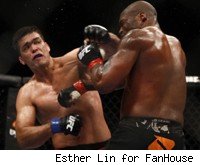 With the UFC 130 main event change, Quinton "Rampage" Jackson will now be the subject of Spike TV's UFC: In the Moment instead of UFC lightweight champ Frankie Edgar.

A 30-minute episode of In the Moment previewing Jackson's preparations against Matt Hamill will air Wednesday, May 25 at 10 p.m. ET.

Unlike the usual Countdown specials, In the Moment has no narration over the episode, allowing the fighter instead to speak to the camera in the style of a video blog.

Spike TV introduced the series in March with Jon Jones showing his family life and training as he headed towards a title challenge against Mauricio "Shogun" Rua at UFC 128.

Edgar was originally slated to be profiled, but sidelined with a back injury, was forced to pull out of a title defense against Gray Maynard. With a hole in the main event, the light heavyweight bout between Jackson and Hamill was promoted to top billing.