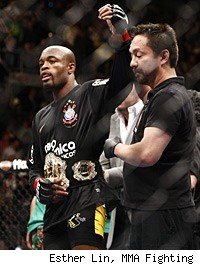 We haven't updated our rankings of the Top 10 middleweights in mixed martial arts in quite some time because, frankly, Anderson Silva has made it a boring division.

That's not to say Silva is boring: When he's on his game, he's as exciting as any athlete this sport has ever seen. And it's not to say the other fighters in the division are boring: There have been plenty of good middleweight scraps over the last few months.

But ranking the middleweight division can get boring because not much changes: It's always Silva on top, and a familiar cast of characters competing for the right to be Silva's next victim.

But there are some indications that the middleweight division in mixed martial arts might be getting a little more interesting. Yushin Okami is finally scheduled to get the title shot that was promised to him months ago, Chael Sonnen is finally getting close to being cleared for a return, and the addition of Strikeforce middleweights (starting in July with Jason Mayhem Miller and likely including Strikeforce champ Jacare Souza soon) may inject some new blood into the middleweight class.

So now is a good time to update our list of the Top 10 middleweights in mixed martial arts, keeping an eye on what's ahead for Silva and the other top fighters.

1. Anderson Silva (1): Silva deserves to be viewed as one of the world's most dominant athletes in any sport, based on his destruction of the rest of the middleweight division (and his two light heavyweight opponents). It's unfortunate that he's still not well known among mainstream American sports fans, but it's nice for him that he'll get the chance to fight in front of the fans in his native Brazil at the upcoming UFC Rio card.

2. Chael Sonnen (2): Yes, Sonnen failed a performance-enhancing drug test, conducted himself like a loudmouth jerk, and got convicted of a felony since the last time he fought. But that doesn't change the fact that he brought Silva to the brink of defeat, and it doesn't change the fact that he dominated three very good opponents in Dan Miller, Yushin Okami and Nate Marquardt before he fought Silva. Sonnen isn't a great guy, but he is a great fighter.

3. Yushin Okami (8): Although it doesn't seem to have most fans all that excited, I believe Silva's upcoming fight against Okami is an extremely intriguing matchup. Okami is the last man to beat Silva (by disqualification in 2006), and Okami's style of grappling and cage control could give Silva the same kinds of problems that Sonnen gave Silva. This fight is going to be fun.

4. Vitor Belfort (4): He'll attempt to bounce back from his loss to Silva with a fight against Yoshihiro Akiyama at UFC 133 on August 6. I was surprised that the UFC didn't delay Belfort's return three more weeks to have him fight in Rio, where he's very popular, but the Akiyama fight is one he should win, and one that will see him get back on track.

5. Demian Maia (5): Maia looks like he's becoming a more cautious fighter, satisfied with using his world-class Brazilian jiu jitsu to control the position and win by decision, rather than forcing his opponents to tap. But you can't argue with Maia's record, 14-2 with losses only to Silva and Nate Marquardt, who would be a Top 10 middleweight if he hadn't moved down to welterweight.

6. Jorge Santiago (9): I can't wait for Santiago to make his return to the UFC against Brian Stann in May. In my book, Santiago's Sengoku victory over Kazuo Misaki was the best fight of 2010, and he's going to be a great matchup for Stann. Santiago went 1-2 in his previous stint in the UFC, in 2006, but he's a better fighter now than he was five years ago.

8. Wanderlei Silva (NR): The Axe Murderer got his wish of a fight with Chris Leben at UFC 132 on July 2; it's impossible to imagine that fight being anything other than a knock-down, drag-out brawl.

9. Brian Stann (NR): Moving down to middleweight has been a great move for Stann; he's 2-0 at 185 pounds and looked great in both victories. Stann's background as a Naval Academy graduate and Silver Star recipient makes him a fighter the UFC wants to promote, and he'll have big things ahead of him in the middleweight division if he can get by Santiago.

10. Michael Bisping (NR): Bisping is the man everyone in the UFC is calling out these days. Of all the potential opponents Bisping could get, Sonnen would be the most interesting. That's a fight that should happen this year.